Nitro Man (ニトロマン, Nitoro Man) is a Robot Master from Mega Man 10. He can transform into a motorcycle and release several Wheel Cutters, his main weapon.

Before contracting Roboenza, Nitro Man was a stunt robot who had appeared in many movies and TV shows. He is fairly bold and would be willing to do whatever stunts he is asked, regardless of the risks and the negative outcomes. Nitro Man is also the president of a robot stunt club, which has sixty members.[1] His weakness is the Chill Spike.

Nitro Man rides around in his bike mode and tries to ram into Mega Man, Proto Man or Bass. Afterwards, he will perform a wheelie, ride up the wall, change back into his normal mode, and fire Wheel Cutters. Nitro Man will also throw several Wheel Cutters while on the ground.

On Easy Mode, he only throws one Wheel Cutter at a time and never performs wheelies; the player should just keep jumping and they should not be hit if careful.

On Hard Mode, his bike mode is extremely fast and he runs a short path again and again instead of across the room.

Chill Spike works best against Nitro Man, since the shot will freeze him (and force him to restart his attack pattern) and the spikes both destroy Wheel Cutters and do heavy damage to him.

Displays the amount of damage in units that Nitro Man will receive from each Special Weapon in Mega Man 10.

Nitro Man's stage consists mainly of motorway areas where the player must navigate past incoming spiked trucks by looking at the road signs at the bottom. There are also some stretches with Sepa Roaders and a count bomb dropdown section holding multiple pickups.

Prior to Nitro Man an appearance in the main story from the series, he was briefly mentioned by Mega Man while fighting Sonic the Hedgehog, when commenting on the latter's speed being faster than Nitro Man. Nitro Man made a brief appearance in Sonic the Hedgehog #250, where he is chasing after Sonic along with Quick Man, Turbo Man, Metal Man, Charge Man, and Slash Man. The group ended up in a pile after Sonic tripped Quick Man, who caused his fellow Robot Masters to stumble.

Nitro Man has a short appearance in the manga Rockman 10 -Extra F-.

Concept artwork of Nitro Man and his stage. 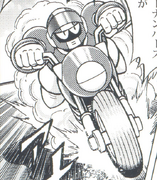 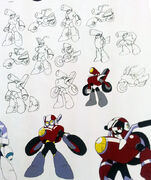 Nitro Man concepts with lineart.
Add a photo to this gallery

Retrieved from "https://megaman.fandom.com/wiki/Nitro_Man?oldid=336783"
Community content is available under CC-BY-SA unless otherwise noted.