Noble Mandrago (ノービル・マンドラゴ, Noble Mandrago) is one of the Einherjar Eight Warriors in Mega Man Zero 4. Mandrago is based on the mandrake plant. She occupies an underground forest of artificial plants that were creating an erosion. She battles Zero in a room covered with earth, and since she is a half-plant, half-drill Reploid, she can drill through the earth and appear anywhere she likes. She fights by letting Mechaniloids do her work, while she weakens her foes with goo. Still, even with all the advantages she had against Zero, she loses.

Noble Mandrago appeared in the fourth chapter of the Rockman Zero manga. Noble Mandrago lives by draining Reploid energy, and many Reploids that explored the forest she lives ended up being killed by her. She was killed by the new Zero. 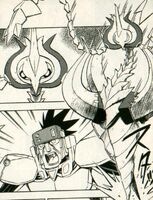 Noble Mandrago in the manga.
Add a photo to this gallery

Retrieved from "https://megaman.fandom.com/wiki/Noble_Mandrago?oldid=179497"
Community content is available under CC-BY-SA unless otherwise noted.