The man who would become Nobody was one of two survivors of the Atlampian Civilization (アトランピア文明, Atoranpia Bunmei). He was in cold sleep during the fall of theAtlampian Civilization . He, along with Sherrice, awakens 3000 year later around the era of 200X and renames himself as "Nobody".

Each attempt had been hindered by Lan Hikari and MegaMan.EXE who had help from a mysterious person called L.o.N. Sherrice soon betrayed Nobody and formally allied with Lan.

Lan and MegaMan.EXE eventually defeated the Trojan Horse causing the Atlampian ruins to explode and Nobody stays behind hoping to die but the destruction of the Trojan Horse caused an anomaly of electromagnetic waves in the server and created a hole in the fabric of time and space and he fell in it. The time hole sent Nobody 3000 years into the past after the fall of the Atlampian Civilization. There he saw that while the civilization had fallen, the people survived and this made him turn over a new leaf. He then made preparations for the future to help Lan to stop himself from destroying the world; signing as L.o.N. (Legacy of Nobody). He then lived out his life with the people.

Nobody appeared as a Battle Memory. 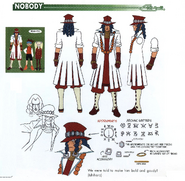 Concept art of Nobody.

Retrieved from "https://megaman.fandom.com/wiki/Nobody?oldid=338953"
Community content is available under CC-BY-SA unless otherwise noted.