Noboru Sunayama (砂山ノボル, Sunayama Noboru) is the operator of DesertMan.EXE and a member of the WWW in Mega Man Battle Network 3. He is a television producer of DNN that created the N1 Grand Prix, and participates in the tournament as "NetBattler Q".

Sunayama is an impatient man, often trying to get Lan and the other contestants to their destinations on time quickly, making liberal use of the word "pronto". He also cares deeply about his ratings and putting on a good show for his audience. This is evidenced when he battles Chaud and prolongs the battle in order to keep it interesting for the viewers. Even when he was going to jail, he asked to see the ratings for the N1 Grand Prix. He also has a habit of narrating everything he does, as if in a television show.

In Rockman.EXE Stream, it is revealed that he believes that NetNavis are tools and that those with power can do as they please.

Noboru first appears after the school trip to SciLab and invites Lan Hikari, Mayl Sakurai, Dex Oyama and Yai Ayanokoji to the N1 Grand Prix preliminaries. He then gets Lan for the second qualifying round. He does commentary for contest at Hades Isle and before the semi finals. Then while, Chaud Blaze and ProtoMan.EXE are fighting NetBattler Q, he reveals his true identity and mission. He is a WWW member sent to delete ProtoMan to display WWW's power. After he starts losing, he cuts the power and kidnaps Chaud's dad, forcing Chaud to hand over ProtoMan for deletion. However, before Chaud can do it, Lan throws his PET at Sunayama, distracting him. Sunayama then says something to Lan that compromises his entire career (he said it in front of the cameras, which were set on "Live Broadcast") Lan and Sunayama Netbattle and Sunayama is defeated. He tries to trick Lan into looking the other way to escape (or as Lan puts it "Pull a BubbleMan on him"), but was stopped by Chaud. He ultimately accepts defeat, although he requests to Chaud that he tell him what the results of the Grand Prix were, as he isn't likely to watch any TV while imprisoned.

Later, he's been released by Wily, and in his words is glad that he can watch TV again. When Wily explains Takeo Inukai's absence as him being "deleted," Sunayama got the hint, and started saluting Wily enthusiastically. He reappears again at the WWW base and uses Full Synchro with DesertMan.EXE to fight MegaMan but still loses. He is inferred alive and unhurt like Mr. Match, Bass, and Wily were after the Alpha incident, as in the ending, the Officials are having a party, and NetBattler Q is staring at a poster, saying nothing and unnoticed by anyone.

Sunayama first appears at ACDC Elementary School, filming Ms. Mari for a program on Model Teachers. When Charlie Airstar arrives and flirts with her, he decides to leave. Later, while Lan is trying to solve a series of thefts, he asks Sunayama for TV footage of the stolen items which he gives him free access to. He is later caught by Charlie while trying to steal another museum artifact. It is revealed the Slur gave him Asteroid DesertMan.EXE and since then, Sunayama has been using him to steal museum artifacts once owned by Lord Wily. and joins the Neo-WWW. He materializes Asteroid DesertMan to attack the NetSaviors while he gets away but is cut off from him by the Dimensional Area. After DesertMan is defeated, he runs into a building where he is pursued by Lan and Chaud. They catch up to him but he reveals a trap: sand floods the room, driving them out into the air. he escapes and is last seen during that episode apologizing to Tesla Magnus for failing in his job.

Eventually, he and the rest of the gang are caught by the police. He is one of the four members to have his mind erased by MegaMan DS, who has separated from MegaMan temporarily. 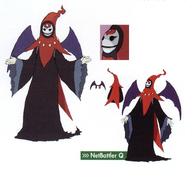 Concept art of NetBattler Q.
Add a photo to this gallery

Retrieved from "https://megaman.fandom.com/wiki/Noboru_Sunayama?oldid=344426"
Community content is available under CC-BY-SA unless otherwise noted.