Noise Change (ノイズチェンジ, Noizu Chenji) is a new transformation system introduced in Mega Man Star Force 3. Noise Change will occur when the Ace Program (エースＰＧＭ Ace PGM) [1] or Joker Program (ジョーカーＰＧＭ Joker PGM) [2] is equipped. With it on, instead of being corrupted by Noise, the program will install itself and have MegaMan resonate with Noise. This calls more of the same resonant Noise from a server in space, making Mega Man stronger as he draws in more Noise. The Programs and its abilities were initially created by Dealer for Wizards to adapt any amount of Noise [3].

Each Noise Form is based on EM being bosses of past and present, although there is no story reason as to why these are based on them. While the Finalization forms are based on two Wizards of Dealer. Each one also has its own special attributes, along with a special Noise Force Big Bang (NFB) that is gained through countering enemies.

The Noise Gauge appears on the top-right corner of the top screen by equipping the Ace/Joker Program, an Ability Wave that has no cost. Doing so will also allow them to begin their battles in their selected Noise Change instead of the standard-form MegaMan. Starting at 0% noise, the player increases their Noise level largely by doing damage. In single player, exceeding 100% noise will generate several effects. All attacks will pierce invisible, and some panels may seem to disappear or "glitch". In PvP, this only happens upon exceeding 200% noise, along with the player's HP count turning red to signal this to the opponent.

Between 0% to 50% noise, the Noise Change starts at its Noise Form (フォームアウト Form Out) stage, where the player has access only to some of its innate abilities. Once the gauge exceeds 50%, the equipped Noise Change will enter Vibrant Noise Form (カラーアウト Color Out), where the player has access to all of its abilities, including its element, Charge Shot, and NFB. Each Noise Change has a weakness to a certain type of attack, and when hit by its weakness, it will revert to the Form Out stage at 0% noise. The gauge will also decrease steadily down to 50%. If the player finishes a battle at over 100% noise, Mega Man starts his next battle at 50% noise, in the Vibrant Noise form of his selected Noise Change.

Brother Cards and Opponent Noise can be used to initiate Multi-Noising (マージアウト Merge Out) into a Multi-Noise Form (マージノイズ Merge Noise), which combines the abilities of both Noise Changes, and changes the player's element, Charge Shot and NFB to match the latter Noise Change. Using Multi-Noise force the meter to 50%, which also sets the Multi-Noise to its Vibrant Noise stage. Performing another Multi-Noise while already under the effects of one will override the previous one, without changing the player's base Noise. (e.g. Merging with Wolf Noise while using Virgo x Taurus will result in Virgo x Wolf) Getting hit by the Multi-Noise's new weakness will revert the player to his base Noise Form stage of his initial Noise, at 0%.

The player must not have any other real-life Brothers to get Rogue Noise, and so Rogue Noise cannot perform Multi-Noise. Rogue Noise also cannot be held by the Noism as a reserve Noise Change.

At noise levels of 200% or higher, the player perform Finalization (ファイナライズ Finalize, also sometimes written as Finalized Noise) through the Custom Screen. This is when the screen prompts the player whether they want to initiate Finalization by accessing the Meteor Server (流星サーバー) by showing a button saying Meteor Server Access.

Initiating Finalization will transform Mega Man to either Black Ace or Red Joker, depending on the version that is being played. Doing so will also cause his noise level to drop to 0%. Additionally, when the Meteor Server is accessed, the player switches to a Meteor Server folder which contains several powerful Battle Cards, inclusive of the NFBs from the other Noises and their exclusive NFB. Finalized Noises have no element or weakness, but expire after three turns, causing the player to revert to the Noise Form stage of his equipped Noise Change at 0% noise.

The Meteor Server folder has different levels, going higher as the player reaches higher noise levels above 200%. Higher levels contain more powerful Battle Cards, starting from LV1 at 200% noise and ending at LV11 at 999.9% noise. (A code exists to raise the Finalize Level by 1, giving the player a secret LV12 Folder if they use it and Finalize at max noise. Use multiple of Purpose Card 'Ultimate Finalize' by brother band, but the maximum level is 12.) They also tend to be unrestricted by the usual rules of folder building and support, and can contain multiple Giga Cards (inclusive of NFBs which are considered so) inside, with no worry about cards being dimmed out. As a result, a player in Finalization may use many Giga Cards to create some devastating combinations.

Finalization can further be customized through use of Purpose Card codes. These give abilities to the Finalization, and can change their Charge Shot (as they do not have one of their own). The abilities from Purpose Card codes are shared throughout the Battle Team, and any card boosts will stack. However, these are exclusive to the Japanese version.

While the first five Noise Changes appear more frequently in Black Ace, and the next five in Red Joker, it is possible (but rare) to acquire Noise Changes attributed to the opposing version of one's game. Rogue Noise has the same (albeit low) encounter rate in both versions. 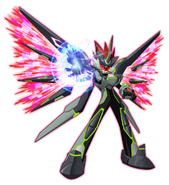 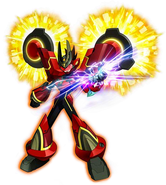 Mega Man without Noise in the style of the Noise Change. 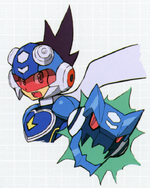 Concept art of the Harp Noise