Notor Banger (ノートルバンジャー, Nōtorubanjā) is a hopping enemy in Mega Man X3 and Mega Man Xtreme 2 with a large cannon on its head. It shoots three grey projectiles out of its gun in various arcs at the player, and then proceeds to leap at them. The projectiles can be shot. It is the first and most common enemy in the Mega Man X3, appearing in the Opening Stage, Blast Hornet's stage, Blizzard Buffalo's stage, Gravity Beetle's stage, Toxic Seahorse's stage, Neon Tiger's stage, Vile's stage, and the second Doppler Stage if Vile wasn't defeated before. 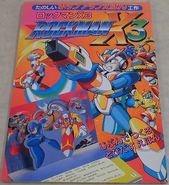 A Notor Banger seen on the cover of the Rockman X3 pop-up book, alongside a Helit.
Add a photo to this gallery
Retrieved from "https://megaman.fandom.com/wiki/Notor_Banger?oldid=319325"
Community content is available under CC-BY-SA unless otherwise noted.