Novas Aventuras de Megaman ("New Adventures of Megaman") was a Capcom-licensed Brazilian Mega Man comic book developed by Estúdio PPA (PPA Studio, PPA standing for "Peixoto Produções Artísticas", which means "Peixoto Artistic Productions", owned by one of the editors and later writers of the story, Sérgio Peixoto) and published by Editora Magnum (Magnum Press) between 1996 and 1998, spawning 16 issues. It was an action humor comic book with gore content and offensive language. Although almost every issue had a different artist, the comic book kept a Japanese-comics art style from the first to the last number. Besides the classic video game characters, the series introduced several original characters. Years later, editor-in-chief Sérgio Peixoto confessed neither him or his partner and writer of the first five issues José Roberto Pereira had ever played a Mega Man video game before and all they knew about the series story was a few information they got from a friend who played the games.

Because of several creative team changes, there are several plot holes and inconsistency in the story and it wasn't concluded, as the series was cancelled in number 16, allegedly due to finnancial problems. The first five issues were written by José Roberto Pereira. Sérgio Peixoto Silva was the editor-in-chief and writer of issue 6 and Orlando Tosetto Jr. wrote from number 7 up to 16, the last one. Daniel HDR and Érica Awano were among the artists that worked in the comic book series.

After Dr. Wily had been put in jail following the events of Mega Man 8, governments all over the Earth decided to dispose of all outdated robots, including Mega Man and Roll. Dr. Light disobeyed their orders and protected Mega Man and Roll using his last resources. He hid them in energy capsules, where they would upgrade in sleep mode for 30 years. A large Japanese company then released a new line of androids known as the "Neo-Mavericks", said to be far more intelligent, independent and self-sustainable. Dr. Wily created an army with the Neo-Mavericks, and every human and robot uprising against him was destroyed. Wily succeeded in taking over the world and Dr. Light died after a nuclear fallout.

Several years later, Mega Man was awakened by Roll, who was being pursued by "Sand Troopers". After defeating them, the two begin their quest to defeat Dr. Wily and end his reign. As the two travel the world and gather new allies, things grow more complicated as new and old foes alike emerge and Roll is revealed to have deeper connections to Project Lazarus, a group who has ties to many of the characters and still holds sway over the events of the present. 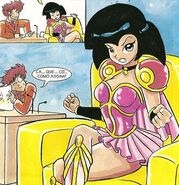