Mega Man Battle Network 2
Null (ヌール, Nūru) is a virus from the Mega Man Battle Network series. It moves around slowly on its side of the battlefield. However, when it goes to attack, the virus will appear in front of its target to punch. It heals itself over time and can change two panels on the target's side to whirlpools, each causing 200 damage. If the target is behind an obstacle, the virus can push the obstacle into the target, damaging the target.

Nulls are blue with white eyes.

Voids are purple with green eyes.

Null&Voids are black with red eyes.

A Null named Ibo is the main antagonist of the 26th episode of MegaMan NT Warrior. In the episode, Ibo is the AI of a ghost ship that began capturing Lan Hikari and his friends when they boarded the ship looking for Tory Froid and Maysa, who were captured by it. It turns out that the ship's AI was infected by a virus and unable to think properly, and Ibo captured them by accident, and began capturing the others when it thought it was after their fish. 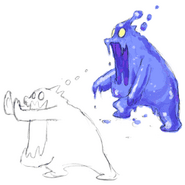 Concept art.
Add a photo to this gallery
Retrieved from "https://megaman.fandom.com/wiki/Null?oldid=304042"
Community content is available under CC-BY-SA unless otherwise noted.