OOPArt (オーパーツ, Ōpātsu) stands for "Out of Place Artifact". It was a device used by the Lost Tribes, each of which was wiped out by their specific OOPArt. Dark Phantom stated that when the weak use the OOPArt, they can't control it and lose themselves in the process, causing them to be consumed by it.

In Mega Man Star Force 2, at the IFL Tower Museum, an OOPArt was on display (which one varies depending on the game's version). Omega-Xis noted that the OOPArt was emanating strong EM waves. When Rogue attacks the museum, he attempts to steal the OOPArt with a Kamikakushi. Mega Man fights for the OOPArt, only to end up with Omega-Xis accidentally swallowing it.

Following this, the spirits of the Tribe started communicating with Geo Stelar and Omega-Xis. First they sounded insane, bugging Mega Man to give them his body. When Mega Man is confronted with several Murians at the same time, the spirits noticed his plight, and taught him how to use their power, allowing Mega Man to wield it and defeat the Murians.

The OOPArt was eventually extracted from Omega-Xis by Hyde, and was used by Dr. Vega to resurrect Mu. After Le Mu's destruction, the continent of Mu is destroyed, and the OOPArt is lost in the ocean.

In the Alternate Dimension, after defeating Apollo Flame for the first time, the spirit of the OOPArt returns, congratulating Mega Man for averting a future of destruction. It also reminds Mega Man on the fragility of bonds, which was what resulted in the Tribe's downfall.

In the anime, all three OOPArts make an appearance. However, the Sword of Berserk was the only one to be in a museum. The OOPArts were deactivated as the continent of Mu was sealed. However, the coming of Cepheus caused the seal of Mu to become undone, and the three OOPArts became active once more. When The Sword of Berserk was looked at with the Visualizer or the Star Carrier, a large amount of EM Waves were being released from it. The Sword of Berserk was targeted by Phantom Black and Yeti Blizzard, for their own personal reasons, such as wealth or immortality. But in the struggle for it, Rockman came and Warrock accidentally ate it. Warrock was scanned for a possible removal of the OOPArt, but it was too risky, as removing it could delete Warrock. Soon, Subaru was asked to locate the other two OOPArts by Doctor Orihime. The Inheritance of Mu Burai's Attack

The OOPArts were also being targeted by Burai, and he attacked Rockman for it. When Burai and Rockman battled a second time, Burai defeated him, along with Harp Note and Cancer Bubble. When Burai attempted to cut into Warrock's head for the OOPArt, the Sword of Berserk activated in self-defense and transformed Rockman into Thunder Berserk, driving Burai off. Come Forth, Sword of Berserk!

Rockman has also used the transformation in times of need, but it soon became out of control, as Rockman transformed for a simple small virus deletion. When he transformed in his battle against Phantom Black, the Sword of Berserk went out of control and began swinging wildly on its own and dragging Rockman all around a desert resort. When Rockman returned to normal, the truth came out. Just like in the games, Warrock experienced great pains from the OOPArts power. When Burai appeared again and battled Rockman, Geo got knocked out when Burai used Battle Cards in the fight. Then the Sword of Berserk pulled Subaru into a dream revealed the real reason for its out of control: Subaru hadn't proved himself worthy to wield it's power. So, the test the Sword had for Subaru was to pull the Sword out of the ground. However, the Sword showed that Subaru only had a little time, as Burai began attacking Warrock, who was carrying Rockman unconscious body. Subaru managed to pull the Sword out just in time to stop Burai from delivering the final blow. Burai showed great surprise at Rockman's mastery over the OOPArt, before being forced to retreat. The Sword then stopped going wild in Warrock's body. Hyde and Ghost Sword of Trials

Soon, the next OOPArt was revealed, the Stone of Dinosaur. It was hidden in a cave inside a lake, that was the home of Brachio. However, the OOPArt caused Brachio to be seen by humans, even though he was made of EM Waves. this in turn caused a tourist attraction to take place, which greatly annoyed Brachio, so he took control of Kyū Demazaki and transformed into Brachio Wave to scare the people away. Gori Monjirō tried to take the OOPArt, but couldn't beat Brachio Wave, so instead thought to use Rockman as a distraction. The plan worked and Gori took the Stone of Dinosaur. The Truth About Dossie Brachio's Wish

The final OOPArt was the Shuriken of Shinobi. It was the treasure of a ninja academy, that was hidden deep within the grounds. Subaru, Hyde, and Gori all competed to try and find the OOPArt, but had to avoid the traps laid. Rockman managed to find it first, but was stopped Burai, who attacked Rockman. In a rush, Rockman used Thunder Berserk to try finishing the battle quickly. This made Yeti Blizzard use the power of the Stone of Dinosaur for a power boost. However, the activation of two OOPArts in the presence of the third OOPArt cause the Gate of Mu to open. Burai tried to stop the Gate from fully opening by attacking it. However, this not only sucked Burai in, but created a high gravity field on the cave, paralyzing everyone in it. But, Hyde, as Phantom Black, was able to use his Phantom Claw as a way of grabbing the last OOPArt. When Rockman reported this to Orihime, she got upset and called Rockman useless. Training de osaru OOPArt of the Ninja Mansion

Now that all three OOPArts were taken, Orihime was able to predict the battle for the OOPArts. The battle happened and when Rockman and Yeti Blizzard fought, the two OOPArts reacted to each other and unleashed a horde of viruses into the city. Three-way OOPArt Struggle An Absurd Strategy!?

Eventually, Orihime decided to make her move and had Empty battle and defeat Hyde and Gori and take their OOPArts. Having two of them made Orihime reveal her true agenda: to open the Gate of Mu and awaken Ra Mu from it slumber of 12,000 years to completely revolutionize the world's EM Waves. She then ordered Empty to attack Rockman for the last OOPArt. Rockman fought well and almost won, but Orihime used the two OOPArts in her possession to heal and empower Empty. This activated all three OOPArts again and the Gate of Mu was opened again. Empty battled against Rockman once more, but the battle was completely one-sided, as Empty had two OOPArts and Rockman only had one. Rockman was defeated and Warrock lured Empty away from Subaru. Empty chased Warrock and captured him, before extracting the OOPArt from him. When Subaru came to, he met with Harp Note and soon found an unconscious Solo, who was healing from his wounds. Solo explained that he was the last survivor of Mu and that he was meant to guard the seal on Mu, which explains why he continuously attacked Subaru for the Sword of Berserk. Solo explained that the three OOPArts each carried a third of Ra Mu's power. Then Solo sturggled to transform into Burai again to pursue the OOPArts from Orihime. Hyde's Scheme Orihime's True Colors Empty of Naught The Soldier of Loneliness, Burai

Meanwhile, Orihime ordered Empty, and the newly recruited Gori and Hyde, to place their respective OOPArts into a stone monument to awaken Ra Mu. Burai arrived, but had to battle against Empty. Subaru arrived and managed to save Warrock from being destroyed by a pool of purple liquid, meant to 'eat' EM Waves. Harp Note and, late on arrival, Cancer Bubble lured Phantom Black and Yeti Blizzard away. Heiji Goyōda, who accidentally got taken into the Continent Mu, told Rockman to hurry and take to OOPArts before their powers were absorbed by Ra Mu. Rockman went to pull the Sword of Berserk out, but Orihime quickly called Empty, who had just defeated the injured Burai, back. Goyōda managed to delay Empty from hurting Rockman in time for Rockman to pull out the OOPArt, transforming into Thunder Berserk once more. However, this seemed to have caused a chain reaction, as the other two OOPArts also ended up being absorbed by Rockman, allowing him to transform into the Tribe King. Empty tried to fight Rockman, but Rockman became too powerful for any of Empty's attacks to work. Rockman Tribe King quickly destroyed Empty with his Over Slash attack. Rockman, Harp Note, Cancer Bubble, and Detective Goyōda managed to escape from the continent with the gate, but soon saw something terrible happen; Ra Mu, now awakened, tries to force open the Gate of Mu to enter the Earth. Burai appears and uses all his strength to push Ra Mu back, while telling Rockman to destroy the gate now that he has all three OOPArt's power. Rockman questioned how, to which Burai replied that "The three stones will guide you". Rockman was then able to unleash the Czar Delta Breaker and seal both Ra Mu and Burai away. The three OOPArts currently still exist within Warrock. The Soldier of Loneliness, Burai The Duel of the Continent Mu 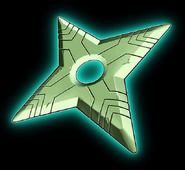 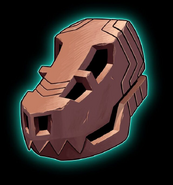 Sword of Berserk in the anime.