Oil Man (オイルマン, Oiruman) is one of the two new Robot Masters from Mega Man Powered Up, a remake of the original Mega Man.

Oil Man is a maintenance robot made by Dr. Light that is able to produce a special type of oil from the dispenser on his left arm that can work with any machinery.

Unlike his polar opposite Time Man, Oil Man has a carefree and reckless attitude similar to that of stereotypical punk teenager, has an urban style of speaking (for example, calling Guts Man an "old man"), and does not always take battling seriously. He enjoys oil and believes it's the answer to everything, often giving his comrades fill-ups, and likes skateboarding, sometimes using said oil to make a skateboard. This also serves as his special weapon, the Oil Slider.

As a boss, Oil Man is reprogrammed by Dr. Wily to take over the world. He resides in an oil field with Hotheads, which can burn the oil around the stage. This is similar to Flame Man's stage from Mega Man 6, although these flames do not instantly kill the player and they go out after a while.

He attacks by jumping into the air and firing three blobs of oil, which can slip up the player if they walk on one. Luckily, the oil can be burned by the Fire Storm, which also defeats him in five hits. His second attack is to use the Oil Slider and slide back and forth similar to Chill Penguin.

As a playable character, Oil Man only has Oil Slider, so his methods of attacking are limited (as Oil Slider is primarily useful as Elec Man's new weakness, jumping over large gaps, and gliding over the surface of water). He can shoot blobs for direct attacks or like 'landmines', but those methods are weak; Oil Slider drops do half the damage the Mega Buster does, like Ice Slasher. Furthermore, the limit to the number of Oil Slider drops on-screen at once is just one; it will disappear after a long wait, if it goes off-screen, if an enemy collides with it, if it burns up from Fire Blocks, or if Oil Man steps on top, and this can prove unfortunate if it lands in a spiked pit. For Oil Man to cause large damage he must crash into enemies using the Oil Slider, but this is not without risk — if the enemy remains, he may still collide and get damaged himself. Once on the Slider, Oil Man won't stop until he jumps off by pressing up + jump, hitting a wall (excluding borders of the screen, which just cause him to slide indefinitely in place), or dying.

On a positive note, Oil Man does not slip on the oil blocks in his stage, and his Oil Slider is faster than Mega Man's. In addition, his jump-brake technique can launch him higher (often to the top of the screen), effectively making it a double-jump.

Oil Man's first appearance outside of the Mega Man games was in the Mega Man series from Archie Comics. He appears as an antagonist alongside Time Man in Issue #4.

Oil Man: Hey, whadja come out here for? Don'tcha have a place near your house for fill-ups?

Oil Man: You for real? Even if that just slipped out, we are still gonna do this!

Oil Man: What's up, Roll? If you want a refill, you came to the right place, baby!

Roll: I don't need THAT! And more importantly, your punishment for behaving like this is one week without oil!

Oil Man: Ow, that was harsh! Now I'll have to teach you a lesson!

Oil Man: Lookin' fine, bro! Check it out, we both got scarves! Now that's stylin'!

Proto Man: Oilman?! This being our first meeting, brother, I'll make this short, so hang on.

Oil Man: Hey, I give you a compliment and you ignore me! What's up, man! Ain't you gonna say somethin' about my scarf?!

Oil Man: Whadja come out here for? If you wanna learn the talk, you'd best be learnin' it somewhere else.

Oil Man: What a hard-head! You gotta keep it real, know what I'm sayin'? Then maybe you'll know what's what!

Oil Man: Hey, old man! You're a bit rusty. Want a little oil? You gotta think about your body before a fight.

Oil Man: Hey! This ain't no place for kids. Didn't your mama teach you nothin'?

Ice Man: My mission is to bring you back to base safely.

Oil Man: Take me back? Me? You for real? That's one cold joke.

Oil Man: Hey, bro! You still goin' around blowin' stuff up in that uncool way you do?

Bomb Man: What? Hey, at least I do what's right!

Oil Man: Don't take it personally. I like your style. But too much boom-boom, can make the party bomb!

Oil Man: Hey! You'd better go somewhere else if you want oil. Don't make me hafta hurt you, cause fire's not allowed around here!

Fire Man: Your attacks just add more fuel to the flame! Prepare to get SMOKED!!

Oil Man: Why you-! Heh, well, burn yourself out. I've got my orders to follow.

Oil Man: Hey, whadja come out here for? Don'tcha got a place near your house for fill-ups?

Elec Man: Humph. I have no need for a fill-up. I never used such a primitive energy source to begin with.

Oil Man: Hey, don't do anything stupid now! Didn't need it, just say so. You didn't hafta hurt my feelings!

Oil Man: If you want a fill-up, I'm gonna hafta turn you down. Kids should be drinkin' milk and sleepin', you know what I'm sayin'?

Time Man: It's hardly time for me to sleep, but rather, it is time to defeat you.

Oil Man: Alright, then how about you try this on? It's punishment time for brat kids like you! 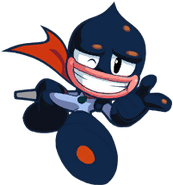 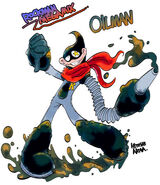