This PET model flips open, with a screen on the left side and a keyboard on the right. A camera can be found in-between the screen and keyboard, most likely so the NetNavi can see the operator. Battle Chips can be sent with a slot on the right side of the keyboard. Along the bottom is a battery which doubles as a handle and folds up for easy storage. A retractable cord lets the user Jack-In. This PET has only been seen in one color.

The first two games are the only time this PET was seen. In Mega Man Battle Network 2, Lan receives a wireless adaptor from Mayl before he leaves for Netopia. The adaptor is believed to come in two pieces, one to connect to the PET, and the other to connect to the desired jack-in port. Its proves to be helpful but also difficult to use, as Lan had to throw the device into a distant port. This is the first instance of wirelessly Jacking-In, a feature which would become a standard later on. When MegaMan gets the program "Change.BAT" and gains the Ability to Style Change this PET can hold up to two styles in addition to the base form, whereas its successor, the Plug-In PET, only holds one plus the base form. 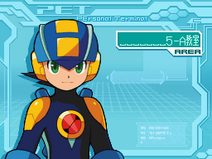 MegaMan in the PET. 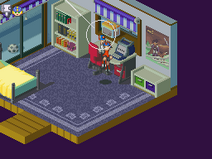 Lan jacking-in to his PC. 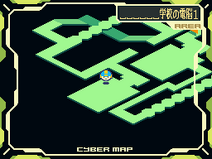 A map of the Cyber World. 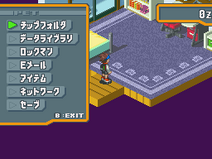 The PET menu from Mega Man Battle Network 2.
Add a photo to this gallery

Lan uses this PET in volumes one through four of the MegaMan NT Warrior manga. It is smashed on page 57, when AirMan and Arashi attack Lan and Chaud. Lan then attempts to change the battery in an attempt to save MegaMan. As a result of this incident Lan gets to try the out the prototype of the Plug-In PET. In a flashback of Lan introducing MegaMan to his class he mentions that this PET was the latest model, implying there were others before it.

Lan showing off his new PET.

Lan's PET, crushed.
Add a photo to this gallery

Retrieved from "https://megaman.fandom.com/wiki/Original_PET?oldid=227680"
Community content is available under CC-BY-SA unless otherwise noted.