Orudakoitans are common in the Underground Ruins from Kattelox Island, and they also appear in the Sub-Cities. In one area from the ruins, several Orudakoitans appear without Arukoitans, and they are able to attack with fireballs that shoot from both eyes on its head.

Orudakoitans with a different color appear in the Shala-Kun Ruins on Ryship Island. They can shoot fireballs even with an Arukoitan nearby. 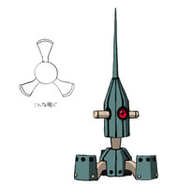 Concept art
Add a photo to this gallery
Retrieved from "https://megaman.fandom.com/wiki/Orudakoitan?oldid=304279"
Community content is available under CC-BY-SA unless otherwise noted.