Oshioki Kobun (おしおきコブン, Oshioki Kobun "Kobun Punishment") is a 2001 mobile phone game from the Rockman DASH series that was available on the Keitai Capcom services in Japan. Its graphics were redesigned some time after its release, and again in the 2010 version. It was also released as part of the Capcom Party Classics for docomo in 2011.

Tron Bonne gets angry with a Kobun and decides to punish him. The Kobun must avoid the weights and spikes while running in a belt conveyor as long as possible, with the player continuously gaining points. The Kobun has a stamina gauge, so the player must balance between running and resting. The longer the player lasts, the higher the final score will be. 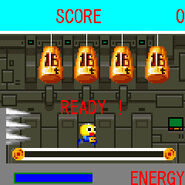 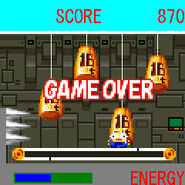 2004 screenshot
Add a photo to this gallery

Retrieved from "https://megaman.fandom.com/wiki/Oshioki_Kobun?oldid=345201"
Community content is available under CC-BY-SA unless otherwise noted.