Swift Runner of the Sands
(砂原の韋駄天)

Overdrive Ostrich, known in Japan as Sonic Ostreague (ソニック・オストリーグ, Sonikku Osutorīgu), is an ostrich-type Reploid in Mega Man X2. Overdrive Ostrich was once a Maverick Hunter of the 7th Airborne Unit, but retired after an accident that cost him the ability to fly. Sigma later sought to recruit him to his Maverick army, seeing use for his superior speed. Overdrive Ostrich, sensing appreciation for his abilities, pledged his loyalty to Sigma and was stationed at an abandoned missile base, charged with the task of launching the one remaining missile stored there at the Hunter Base. Before confronting Overdrive Ostrich, X manages to destroy this missile just as it launches.

Overdrive Ostrich is a very tall Reploid with a design based on an ostrich. He possesses along neck and a beaked mouth. His armor is mostly blue and orange in color, and sports blades along its edges. His feet possess bird-like toes.

Overdrive Ostrich is a cunning warrior. He is very proud of his speed, but insecure about his inability to fly, something which Sigma took advantage of. Notably, he is one of the earliest bosses in the Mega Man series to have a voice line, often making a bird-like call to taunt X.

Overdrive Ostrich is one of the few Mavericks with an outdoor battle arena, one of the largest in any Mega Man game to date. His most common attack is a charging run, which is easily dodged by jumping over him. He will also jump and kick across the screen with just enough room to run or dash under. Overdrive tends to use his Sonic Slicer in its charged state, by jumping high and firing six energy boomerangs that rain down on the battlefield. The one unique attack that he will perform, that usually occurs when X puts a lot of distance between him and Ostrich, involves him running offscreen out into the desert (background) and then jumping back to the foreground to try and land on X. He is weak to Crystal Hunter, which will both damage and freeze him, but once he thaws he will immediately counter with Sonic Slicer. He is also vulnerable to Silk Shot. In Mega Man Xtreme 2, Zero can take him on with Lightning.

Displays the amount of damage in units that Overdrive Ostrich will receive from each Special Weapon in Mega Man X2.

Overdrive Ostrich appears in the Rockman X2 manga, where his backstory is the same, with some differences. For instance, he was friends with Storm Eagle. Sigma retrives Eagle's buster and shows it to him, saying his dying wish was to have Ostrich join the Mavericks and X-Hunters. Ostrich, believing Sigma's version of events, agrees and takes his leave while Sigma smahes Storm Eagle's buster with sadistic glee. While fighting X, Ostrich realizes his mistake and sacrificies himself to stop a missile.

Overdrive Ostrich appeared during the Worlds Unite special event of the Mega Man and Sonic the Hedgehog comic series by Archie Comics as a part of Sigma's Maverick army.

Overdrive Ostrich was revived by the Limited as Sonic Ostreague L, having his mobility increased and the power of his Sonic Slicer doubled. He is the first Limit Reploid fought by X when he went to investigate a city where all Reploids became Mavericks, and X defeats him with Crystal Hunter. 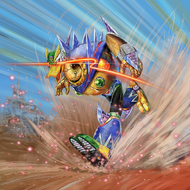 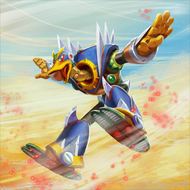 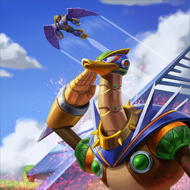 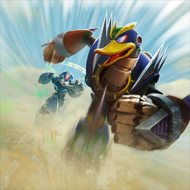