"Defectives must be disposed of..."
―Pandora as she prepares to strike down the awakened Grey, Mega Man ZX Advent

Pandora (パンドラ, Pandora) is a mysterious character from Mega Man ZX and Mega Man ZX Advent who works to revive Model W. She is usually seen with Prometheus. She is very quiet and uses ice and thunder elements. Physically she appears to be 10-17 years old, but she actually is over 50 years old.

Like her older brother, Pandora fits the motif of Witch, her nickname. She wears an odd, egg-shaped helmet with a jewel in the center. However, what appears to be an egg-shaped helmet actually separates into two pieces which first seen used to take the passwords from Model X and Model Z. Her white, blue and black scheme strongly contrasts that of her brother as well. Like Prometheus, her armor color changes when she uses an elemental attack, however, she has two color changes instead of one, a yellow and blue scheme for Thunder attacks and a light blue one for Ice attack. She will attack with both elements if white-colored.

Less is known about Pandora than even about her brother Prometheus. She rarely speaks, and usually lets Prometheus handle communication. During the rare occasions she talks, she speaks slowly and softly. Like her brother Prometheus, she is completely devoted to Model W (Though, ironically, in Ashe/Grey's battle against her and her brother, they were also planning on destroying Model W, as well as all Albert had created.). Being "the voice of Model W", she seems to have inherited Dr. Weil's solitude and loneliness.

After Serpent had excavated the Biometals Model H, Model F, Model L and Model P prior to the game's events, Prometheus and Pandora approached Serpent. Several company workers mentioned that after their meeting, both Serpent and Slither Inc. changed their way of business.

Prometheus and Pandora worked with Serpent in order to reawaken the dormant Model W. Pandora encounters Vent/Aile in Area M, only to retreat upon defeat and reappear with Prometheus at Area O. After both of them are defeated, they disappear until ZX Advent.

At the beginning of ZX Advent, after Grey awakens from his stasis within the Mysterious Lab, he is found by Pandora, who calls him a "Defective" and proclaims that he must be destroyed. However, Grey fires at her with a dropped gun and runs away. She and Prometheus later reappear on the train to retrieve the Model A Biometal, but Grey/Ashe biomerges with it and they decide to let it remain and participate in the Game of Destiny. It is later revealed that Prometheus and Pandora are sibling Mega Men, "DAN-001" and "DAN-002" created by Master Albert to further the Game of Destiny. Albert intentionally created with repeatedly short life spans so that they would not be able to betray him. Prometheus kills Albert's decoy at the Submerged Volcano in the mistaken belief that it was Albert. However, she and Prometheus plan to hasten the Destiny of Destruction, as well as destroy everything that Albert worked on (including themselves, as indicated by Prometheus's line of "Going out with a bang" right before the fight), and attack Grey/Ashe. After Grey/Ashe defeats the pair, Model W absorbs their souls and the real Albert appears. The volcano begins to collapse, and Grey/Ashe is unable to rescue them. However, it is unknown if Prometheus and Pandora are truly dead or not. However, considering their important role in the series, they probably had survived, and if so, rather comically to their distaste (they probably also lost their MegaMerged forms in the process, due to the fact they had lost so much energy, but still holding on to their Model W fragments).

Unlike other Mega Men, Pandora herself is not based on any specific character, but her abilities can be considered a mix of Harpuia's abilities over lightning and wind, as she is capable of using electrical blasts, as well as charge her rod with electricity. She also has the ability to control her rod at a distance and use it in mid-air for long ranged attacks. With Leviathan's abilities over ice, which make her able to use icy blasts, those being solid fragments of ice. Hence Prometheus is her exact opposite and complement.

In Greek mythology, Pandora was the first woman to be created by the gods to punish mankind for tricking them. She was given to Prometheus' brother, Epimetheus, who fell in love with her. However, the gods had also given her a box of evils that she unwittingly opened and released upon the world; the only thing left inside the box was hope.

Pandora and Prometheus in their Reploid forms. 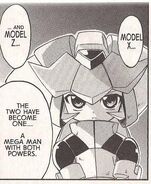 Pandora in the manga.
Add a photo to this gallery

Retrieved from "https://megaman.fandom.com/wiki/Pandora?oldid=117663"
Community content is available under CC-BY-SA unless otherwise noted.