Zero was sent by Elpizo to rob the goods from a Neo Arcadia train, and encounters Panter when he reaches the end and another train catches up. He mainly uses electrical attacks and is extremely versatile. Many of his attacks can be dodged by wall sliding down the middle of the two trains. After his defeat, Zero receives the Thunder Chip, and if the player has rank A or S, the EX Skill Spark Shot. 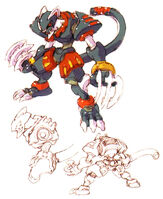 Retrieved from "https://megaman.fandom.com/wiki/Panter_Flauclaws?oldid=294807"
Community content is available under CC-BY-SA unless otherwise noted.