Parasitic Bomb (パラスティックボム, Parasutikku Bomu) is the Special Weapon that X obtains from Blast Hornet in Mega Man X3. Its standard form is a spiked bomb that latches onto enemies and explodes. If another enemy is nearby, the bomb will often carry and crash the first enemy into the second, destroying both. When fully charged, an array of targeting cursors surround X which seek out nearby enemies. When a cursor locks onto something, a mechanical hornet will attack the target. Weapon Energy is not consumed until the hornet appears and attacks the target. This weapon is unique in that its charged form activates during charging and ends when the player lets go of the fire button. Though the bomb can't latch onto them, Blizzard Buffalo and Vile's Goliath Ride Armor are weak to this weapon. 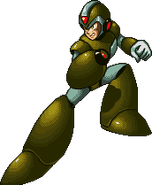