Pat Fahran runs a Net Cooking class in Green Town. During this class, Lan operates her NetNavi, SlashMan, and gathers ingredients to make Cyber Soup. After completion of the class and winning a NetBattle with SlashMan, MegaMan gains Slash Cross.

Pat used to be a chef on a luxury liner in Beyondard, before it was attacked by Zoanoroid WhaleMan.EXE. Pat was the sole survivor of the attack, and after being washed ashore she was found by a village, where she currently works as the village chef.

Pat holds a great passion in her job, and makes it a point to do her best in preparing meals, so that she can make everyone happy with her cooking. Also, due to her past, whenever she is faced with beast viruses or a Zoanoroid, she flies into a rage.

When Lan Hikari is found near the village, half-starved, Pat helps cook up a feast to solve his hunger, and shortly after they become friends, much to Mick's (Kojiro) chagrin, who had a crush on Pat. Mick decided to win Pat's favor by catching a large amount of fish, using Iris' touchpen that contained Trill.

When Mick goes out to sea, using the light coming from Trill to catch fish, Zoano WhaleMan appears and attacks the fishing boat. Pat recognizes Zoano WhaleMan from the scars which SlashMan had inflicted on him back when he attacked the liner. While Lan used Cross Fusion to rescue Mick from the boat, Beyondard's environment made it hard to maintain Cross Fusion, and so Pat materialized SlashMan to finish off Zoano WhaleMan for good, avenging the ones he killed.

She reappears after Chaud and Maylu bring an injured Baryl to her village. Afterwards, she accompanies Baryl to the battlefield and joins up with the group, where they fight off the waves of beast viruses of both armies. She then accompanies the group to the Wily Research Facility.

She also carries a large butchers knife on her at all times and is seen twirling it around on many occasions. 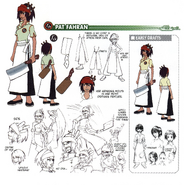 Concept art of Pat Fahran
Add a photo to this gallery

Retrieved from "https://megaman.fandom.com/wiki/Pat_Fahran?oldid=328602"
Community content is available under CC-BY-SA unless otherwise noted.