Patrick Sprigs, or Pat as he likes to be called, known as Tsukasa Futaba (双葉ツカサ, Futaba Tsukasa) in Japan, is a character in the Mega Man Star Force series and one of Geo Stelar's classmates. He has another personality within him called Rey, known as Hikaru (ヒカル, Hikaru) in Japan. After performing a EM Wave Change with Gemini, they are referred to by the name Gemini Spark.

Pat is shown to be a generally nice person, while Rey is the exact opposite and pushes Pat into hating the world. This split personality disorder is taken advantage of by Gemini, resulting in them doing a EM Wave Change into Gemini Spark.

Pat has an interest in flowers and has Dream Park as his "safe haven," much like Geo who has Vista Point (which was later replaced by the school roof in Mega Man Star Force 3).

Abandoned by his parents in a junkyard on Dream Island as an infant, Pat developed multiple personality disorder, the other more evil personality named Rey. While generally nice, Pat is pushed by Rey to hate the world, and has also been in contact with Gemini (the FM King's right-hand man) for an extended period prior to Geo's meeting with Omega-Xis. Once merged, Pat and Rey separate into two separate bodies representing the form of Gemini Spark.

Pat and Geo managed to become good friends before he revealed himself to be Gemini Spark. They could relate to each other and even considered forming a BrotherBand. But when Rey took over shortly after, they challenge Geo as Gemini Spark. Even though Geo won, he could not face Pat again and lost his trust in others.

Later, Gemini himself is restored by the FM King, Cepheus, along with the other FM warriors. In an attempt to stop Geo and Omega-Xis from going to space and fighting Andromeda, he faces them both, using memory data to re-assume the form of Gemini Spark. However, due to Pat's intervention, Geo and Omega-Xis are able to fight back and destroy Gemini, though he is later revived once again by Cepheus. Pat then rejoins Geo's friends.

In the game's final scene, it is revealed that it was Gemini who preyed on Cepheus's paranoia and drove him to destroy the Planet AM.

After completing the game, Pat appears at the Whazzap Ruins as a friendly, optional boss; meaning Gemini became Pat's EM partner, albeit a very out of control one.

In the anime, the Rey personality is virtually absent, with Gemini becoming Gemini Spark Black, and with Pat seemingly a willing participant in the FM Planet's plans. Pay is sometimes seen with earphones listening to his Wave Scanner (which contains Gemini).

Rescued by Gemini after being run over by a truck and left to die in the ensuing blaze, Pat decided to form an alliance with Gemini. Unlike Geo, Pat had already mastered EM Wave Change before they met. Gemini Spark was easily the strongest of the FM-ians, overwhelming Mega Man in their first two battles, and even in later fights the only way Mega Man could win was by using the Star Force.

Although the other FM-ians plan to destroy Earth, Pat and Gemini secretly intend to destroy the FM Planet by taking the Andromeda Key for themselves. He tells Luna about treasure found in an abandoned amusement park and uses Crown Thunder to help them in their plans. They give Cancer a fake Andromeda Key after the real one was destroyed by Omega-Xis, telling Cancer that the one they gave him was real (and keeping the real one for themselves) and recreating the EM Wave Conversion System for the FM-ians. Pat and Gemini then remain behind the scenes waiting for the FM-ians to gather enough minus energy for the Andromeda Key. However, the FM-ian king Cepheus eventually calls the FM-ians back to Planet FM, and Gemini then betrays the other FM-ians, deleting them all (except for Cancer, who manages to escape) to use them as energy to restore the Andromeda Key. Pat/Gemini Spark White eventually sacrifices his "Black" counterpart to fully restore Andromeda so it could destroy Earth after its previous state was damaged by the three Sages of AM.

However, Geo and Omega-Xis destroy the Andromeda Key while Cepheus regresses Gemini Spark White back to human form and erases Pat's memories. Thus, he is able to go back to his normal life.

In Tribe, Pat is absent throughout the whole season, except in the last episode where Geo and the rest of the gang meet up to attend Sonia's concert. Pat appears for a brief moment with Luna, Zack, and Bud waiting for Geo. It is presumable that Pat no longer has any evil intentions, having his memories of helping the FM-ians completely erased from him in the last season's finale.

In the manga, Gemini Spark only has one embodiment that alternates between the darker, more aggressive Black (B) and the calmer, more mellow White (W) (the two personalities usually dispute over control of the body). When Gemini Spark was a child, he was abandoned in space and found by Crown Thunder. They shared a bond through their control of lightning, and thus Crown Thunder raised him. Considering Gemini Spark has existed as Gemini Spark since his youth, it is unlikely that Pat and Gemini exist independently. 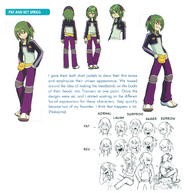 Concept art of Pat and Rey.