Pelicanu (ペリカーヌ, Perikānu) is a pelican robot enemy that appears in Centaur Man's stage in Mega Man 6. Pelicanu was originally created by Dr. Wily to carry meals for him, but as it used to drop what it was carrying, Wily modified it for combat. They drops fishes onto Mega Man that flops and explodes after a while. Mega Man can shoot the fish for items.

In episode 3 of Super Adventure Rockman, Mega Man fights three Pelicanus if the player chose to go forward in the maze Magnet Man appears, and one of them uses lasers from its eyes in the animation. In battle, they only attack by dropping three fishes at the same time. After defeating them, Mega Man finds an Item Box in the mouth of one of them.

If the player dodges to the left of the Magnet Missile that appears in the maze, Mega Man will fight against some Mag Flys. Beat finds a chip after they defeat them, but a Pelicanu hits Beat from behind and takes the chip away, leaving him angry.

Pelicani as it appears in Super Adventure Rockman. 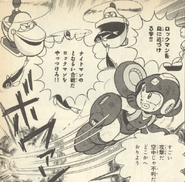 Rockman 6 manga
Add a photo to this gallery

Retrieved from "https://megaman.fandom.com/wiki/Pelicanu?oldid=345758"
Community content is available under CC-BY-SA unless otherwise noted.