Pepe (ペペ, Pepe), known as Peng in some English sources, is a flying, robotic penguin that made their first appearances in Ice Man's Stage and the third Wily Stage from the first Mega Man game. They were originally used for photography.

In the original Mega Man and both of its remakes, Mega Man: The Wily Wars and Mega Man Powered Up, Pepes fly in from the right side of the screen and travel to the left in a wavy pattern. They can be especially dangerous while crossing gaps, as the knock back Mega Man receives from being hit can cause him to fall off platforms and into pits.

Pepe appears as a virus in Mega Man Network Transmission. They fly like the original, but the range of movement isn't as large. Also, the virus is much larger than the original enemy. 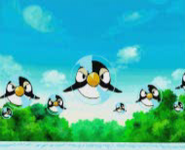 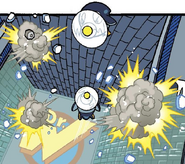 Pepe in the Mega Man comic. 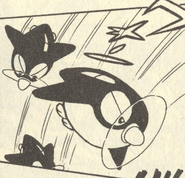 Pepe in the Rockman manga.