"A PET is great, but it's only as great as it's user."
―Civilian of Central Town, Mega Man Battle Network 6

A Personal Terminal, PET for short,[1] (pronounced "pet" in the original Japanese version of the anime and "P-E-T" in the English version), also known as Mobile Terminal, is a small electronic portable device that plays an important role in the Mega Man Battle Network and Mega Man Star Force series. The PET was invented by Dr. Tadashi Hikari, grandfather of Lan Hikari. Various terminal models appear throughout the series in a wide variety of colors and styles.

A terminal is essentially a more advanced PDA device. It enables a user to make phone calls, send E-mail, store and use electronic money (known as "Zenny") and access the Internet wirelessly. It may also house a "Network Navigator", or NetNavi (or simply, "Navi"), an artificial intelligence program that interacts with the user (known as the NetNavi's "operator", or "NetOp" in the English anime and manga, although it can operate without one). Other than operating the PET's main functions, the NetNavi is capable to exit the PET by "jacking in" to electronic devices to investigate or explore the cyber network within it (known as "plugging in" in Japan). "Jack in" ("plug in") is frequently said by human characters when connecting their PETs to a machine. PETs are used for personal convenience as well as machinery maintenance.

The terminals are often modeled after real-life devices, such as handheld gaming consoles or MP3 players. Usually, there is a screen with two or three buttons, a device for jacking in, and a slot for Battle Chips (later succeeded by Battle Cards). Earlier models were larger with more obstructing features, but subsequent models would become smaller, sleeker, and more simple, limiting most interactivity to the NetNavi or via (in later models) touch screen technology.

The PET is also very vital during the anime-exclusive Cross Fusion technique in MegaMan NT Warrior. During the fusion of operators with their NetNavis, the PET becomes the central power source for the transformation, stored within the NetNavi's unique symbol crest (which is usually located on the human's chest). If this crest is attacked directly or completely destroyed, the fusion will deteriorate, and the PET can suffer serious damage.

There were five different types of PETs in the Mega Man Battle Network series, with two upgrades of one model. The PET model is often updated or redesigned all together between subsequent game entries, anime series, and manga story arcs, each with its own unique functions and uses. While Yuichiro Hikari often aids in the production of PETs, it is the company from Chaud's father, IPC (known as BlazeQuest in the English anime) that produces and distributes the various PET models.

The first two Mega Man Battle Network video games and Rockman.EXE Operate Shooting Star used the original model simply known as the "PET." It was designed with a flip-open laptop-esque screen with its own keyboard (a feature unique to this PET), and it was held by a handle along the bottom (resembling the shape of a sign board on a post). It uses a retractable cord to jack in. Though this PET did not appear in the anime, it appeared in the MegaMan NT Warrior manga.

It has a sleeker design. It is squarish with rounded edges and a larger piece attached to the bottom left corner as a grip. Like the original PET, it features a retractable cord for jacking-in. Most of the PETs are a light-blue color, but some characters have uniquely-colored PETs.

Introduced in Mega Man Battle Network 4, this PET was also used in the 51-episode MegaMan NT Warrior Axess anime series. This model was designed more like a flip-open cellular phone, and as such can be conventionally used as one. A sliding piece along the bottom would cause the screen to open, revealing a button interface. There is also a small handle piece along the right side to hold the PET more sturdily. This PET introduced a new method of wirelessly jacking-in through the use of infrared lasers in the anime. This PET came in many unique colors representative of various characters. A message board in Mega Man Battle Network 4 states that they were designed by Dr. Hikari and Mr. Famous.

The PET was subsequently updated for the Japanese-exclusive title Rockman.EXE 4.5 Real Operation and was also featured in the MegaMan NT Warrior Axess anime. This PET is merely an aesthetic update in the games, but in the anime, it enhances Lan's Cross Fusion abilities. Lan is the only character to receive an Advanced PET II in the anime. Lan began using this PET in episode 34 and used it until episode 3 of Rockman.EXE Stream.

With Mega Man Battle Network 5 (and the 51-episode Rockman.EXE Stream anime series), the Progress PET (also known as the PET III) was introduced. This PET returns to a design similar to the anime/third game PET with a wider design, and somewhat resembles a traditional Game Boy Advance, PSP, flat faced phone, or a Game Boy Micro. In the anime, this PET features a holographic touch screen, allowing the Operator/NetOp to drag-and-drop Battle Chip data onto their NetNavi with touch alone. This PET also allows for the attachment of various accessory upgrades, specifically for upgrading NetNavis' abilities during battle. Also, in the anime, the PET could enhance Lan and Chaud's Cross Fusion strength, and give them a new design during the fusion. This is the only PET known to jack in using infrared rays in the games, featured in the scenario on the Queen Bohemia in Mega Man Battle Network 5. 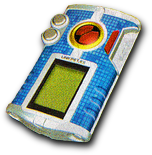 Introduced in Mega Man Battle Network 6, this PET was also used in the Rockman.EXE Beast and Rockman.EXE Beast+ anime series. This PET resembles an iPod MP3 player. In the anime, Lan is seen wearing the PET in a strap on his bicep. The Link PET retains the holographic touch screen of its predecessor, and also features a stylus for further interactivity, possibly a reference for the Nintendo DS stylus.

The Transer is the mobile terminal used in the first Mega Man Star Force game, several years after the Mega Man Battle Network series. In this era the abbreviation PET is no longer used, and the use of EM Waves made the term internet obsolete,[2] although computers and e-mails still exist. It uses Battle Cards instead of Battle Chips, which were created three years before the game to help people deal with EM Viruses. As it can be used to directly attack viruses, NetNavis are no longer stored in terminals to help, but a person can have multiple Navis with different skills by using Navi Cards. A new feature is the BrotherBand system that allows "Brothers" to see each other's personal information to build trust. It also aids in EM Wave Changes.

A new terminal from Mega Man Star Force 2. Its design and the new Matter Wave technology are based on ancient terminals from Mu discovered by Doctor Vega. AMAKEN also helped in its creation, adding the Link Power feature.

In the Shooting Star Rockman Tribe anime, the Star Carrier and Matter Wave function were created by Tom Dubius.

The successor of the Star Carrier that appeared in Mega Man Star Force 3. Its features are improved and it able to hold a Wizard, which act much like NetNavis.

Battle Chip Gates don't feature any kind of interface or the ability to house a NetNavi; instead, they can only be used to transfer Battle Chips to remote NetNavis, even NetNavis that don't belong to the Operator/NetOp. In the anime, it is also used to send Battle Chips to humans who are transformed with Cross Fusion or remote Navis, or to even activate Battle Chips that don't require a NetNavi for the effect (such as field-altering Battle Chips like RockCube (which can still crush opponents) or Grass Stage instead of swords or projectiles. Although, it can still activate certain offensive chips like Flame Tower, MiniBomb, and TimeBomb, or even use certain Battle Chips to summon their virus counterparts, e.g. Cannon summons Canodumb, Guard/Shockwave summons Mettaur, Life Aura summons Scuttlest, DashAttack summons Fishy, Train/Trident Arrow summons Piranha, etc. Sword Chips have never been activated on their own by the Battle Chip Gate.

The Battle Chip Gate first appeared for the fourth Battle Network title as a Japanese-exclusive toy accessory. It connected to the Game Boy Advance and allowed the player to transmit real-life toy Battle Chips to the NetNavis in the game. It received a redesign for its usage in the fifth Battle Network title, and both models appeared in Axess and Stream respectively. The Battle Chip Gates were also used in various spin-off titles such as Rockman EXE 4.5.

For the sixth Battle Network video game, the Battle Chip Gate would again be updated, this time to the Beast Link Gate. These devices have the same use as their predecessors but come in two styles representative of the Cybeasts Gregar and Falzar. However, in the final two anime series, Beast and Beast+, the Beast Link Gates are instead used as PETs by the residents of the parallel world Beyondard, regardless that they lack of an interface for viewing the NetNavis they house.

The Wave Scanner is like a successor to the Battle Chip Gate.

Electronic toy versions of the PETs have been distributed to the Japanese market by Bandai and Takara, and various toy Battle Chips were also distributed for use on the PETs. The PETs often come in many colors with various accessories (such as carrying cases). Accessories to the Progress PET can be purchased, as well as different face-plates for the Link PET. The PETs often simulate housing a virtual NetNavi that can battle with fictional computer viruses or other NetNavis, similar to digital pets.

Toy versions of every PET model except the original PET used in the first two Battle Network games have been produced. Most of the PETs are still being manufactured and can be purchased from various import shops. However, the original PET (from the anime and third game; produced by Bandai) has been discontinued, and these PETs are often deemed valuable in online auctions. So far, only the Advanced PET (in three available colors) has been imported to the United States market. This version uses physical Battle Chips to fight "viruses," and two can be connected with a link cable.

Beast Link Gate (Falzar)
Add a photo to this gallery

Retrieved from "https://megaman.fandom.com/wiki/Personal_Terminal?oldid=331666"
Community content is available under CC-BY-SA unless otherwise noted.