Phoenix Magnion was a member of Hidden Phantom's Cutting Shadow Squadron. After Phantom's death he had to work for Fighting Fefnir's Scorched Earth Squadron. He leads the guard patrol unit for a power reactor located about 100 km north to the Resistance Base, which supplies electricity to the Neo Arcadian army. Magnion confuses his enemies with illusions and uses fire based attacks. Zero had the mission to destroy the power reactors. After destroying all of them, Magnion appears and fights Zero. The Power Room stage has various secret passages. After the mission, all pantheon-type enemies in the Power Room, Forest of Dysis (Hyleg Ourobockle's stage), Computer Zone (Poler Kamrous' stage), and Neo Arcadia train (Panter Flauclaws' stage) will disappear.

Magnion stands in place and disappears when attacked, and uses an attack when he reappears. He can stand above one minute if not attacked, but will attack without stop after this. He uses an illusion that creates 4 copies of him, shoots six arrows/feathers from his wings three times in different directions, and tries to catch the player and summon images of Vile, Agile, Bit, and Colonel to attack while holding him. Sometimes he will go backward when attacked and dash at Zero. Lava erupts from the floor periodically, but stops if Phoenix Magnion is effectively struck by an attack. Also, depending on where the battle takes place, the lava will appear more or less. At rank A or S, he will use Rising Flame, where he will try to push Zero and then appear below him with a rising attack.

Defeating him will give Zero the Flame Chip, and at rank A or S, the Tenshouzan EX Skill.

Nickname: Fire God of Illusion (Genwaku no Entei, 幻惑の炎帝)
EX skill: Rising Flame (ライジングフレイム) - Phoenix Magnion turns a fiery, transparent gold, then rushes at Zero. If his attack is successful Zero will be dragged in midair while Phoenix Magnion vanishes, it will be impossible to break free, and will be followed by a vicious rising sweep as he reappears.
Mission: Destroy Power Room
Zero's EX skill: Tenshouzan (Heaven Rising Slash) 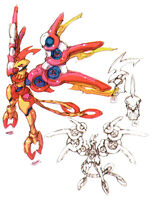 Magnion's concept art.
Add a photo to this gallery 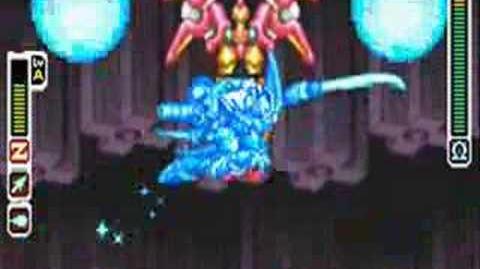 Retrieved from "https://megaman.fandom.com/wiki/Phoenix_Magnion?oldid=294806"
Community content is available under CC-BY-SA unless otherwise noted.