Basic Pickelmans throw several pickaxes and protects their body with a shield. Fire Storm and Hyper Bomb can both defeat the enemy in a single hit as they ignore the defenses of the Pickelman's shield. It appears in Guts Man's stage in the first Mega Man game and Mega Man: Powered Up, in Buster Rod G's stage in Mega Man: The Wily Wars, and in Episode 2 of Super Adventure Rockman. Its shield can be knocked out in Super Adventure Rockman and Mega Man: Powered Up.

An industrial robot created by giving arms and legs to a Metall. Back up, and attack from afar.

Amount of shots/hits from Special Weapons it takes to destroy a Pickelman.

Pickelman Bulls (ピッケルマン・ブル, Pikkeruman Buru) are Pickelmans in a small bulldozer that can only be damaged in its head. It appears in Top Man, Hard Man, Shadow Man and Spark Man's stages. It is also one of the boss cards on RockBoard.

They show up again in Hard Man's and Top Man's Stage in Mega Man II.

They also appear in Buster Rod G's Stage and the 3rd Wily Tower Stage in Mega Man: The Wily Wars.

Amount of shots/hits from Special Weapons it takes to destroy a Pickelman Bull.

Pickelman Dada (ピッケルマン・ダダ, Pikkeruman Dada) is a Pickelman variant from Mega Man III that uses a loud jackhammer-like machine. It appears in Spark Man's, Gemini Man's and Shadow Man's stages, as well as Wily's Marine Fortress. It is similar to the Dada enemy from Snake Man's stage.

Mega Man 11
Pickmans, known as Pickelmans in Japan, return in Mega Man 11. They behave almost exactly as they did in the first Mega Man game, but without their shields. Their most prominent appearance is on Impact Man's stage.

A Picket Man appeared in the second issue of the Mega Man comics published by Archie Comics. When Mega Man was trying to locate Guts Man and fight him, he encountered what looked like a human worker and tried to tell him to evacuate, although he eventually realized his mistake when he saw that "he" was actually a robot. Another one makes an appearance near the end of Mega Man Issue 8 (Archie Comics) where its seen working on the Wily Castle from Mega Man 2.

Pickelman Bull makes an appearance on the Variant Cover of Mega Man #40.

Pickelman and his variations appeared in the Rockman manga series. 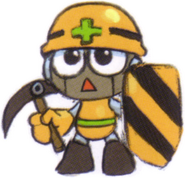 Concept art of Picket Man from Mega Man: Powered Up.

Pickelman in the Rockman manga. 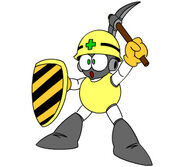 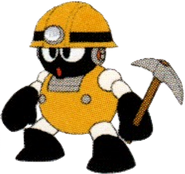