View source
watch 03:01
Wiki Targeted (Games)
Do you like this video?
Play Sound

Pierobot (ピエロボット, Pierobotto) is a robot enemy in the original Mega Man series that walks on a large gear. Pierobot and Blocky were originally members of a robot circus, and they acted together as a comedy duo, Pierobot being the straight man, and Blocky the funny man. They appear in Metal Man's stage from Mega Man 2 and Mega Man II, and also appear as viruses in the Arcade Computer (ColorMan.EXE's stage) in Mega Man Network Transmission. However, the virus rides a ball instead of a gear.

Amount of shots/hits from Special Weapons it takes to destroy a Pierobot and its gear.

Below are the virus stats for Pierobot in the Battle Network game Mega Man Network Transmission.

Two Pierobots (known as Gear Clowns) appear in the episode "The Big Game" from Captain N: The Game Master. Dr. Wily sends them to compete against the N Team in California Games to produce more energy for his machine. They participate in a BMX race and taunt Kevin and Lana by calling them slowpokes. 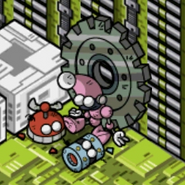 Cameo in the Mega Man event from Zombie Cafe.

Pierobot in the background of Metal Man's stage in Street Fighter x All Capcom.