Spike explodes if the attack is used on a wall.

"Charge forward in a devastating spike attack that would make Impact Man proud! Turn on your Power Gear for a bigger dash with explosive force. Use it in midair, too!"
―Weapon description, Mega Man 11

Pile Driver, known as Pile Drive (パイルドライブ, Pairu Doraibu) in Japan, is Impact Man's Special Weapon in Mega Man 11. Once Mega Man obtains it he gains a special Dash ability that allows him to attack opponents he rams into which shoves them off into an explosion. It can also function as an Air Dash attack as well, though its range is slightly shorter when used in the air.

Using this weapon with the Power Gear enhances this attack, giving Mega Man a longer dash and generating greater explosions.

Just like the other Special Weapons in Mega Man 11, Pile Driver gives Mega Man new Head Gear and Arm Gear that alters his physical appearance when equipped, rather than simply swapping his colors. The Head Gear is a helmet that closely resembles Impact Man's (minus the head spike), and the Arm Gear is a jackhammer drill with which Mega Man uses to perform the dash attack. It also colors Mega Man's body to be orange on one side and yellow on the other side & black in the middle, much like Impact Man himself.

This weapon is the weakness of Bounce Man. 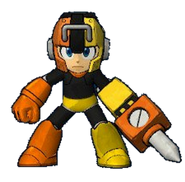 In-game model
Add a photo to this gallery