This pink-haired navigator is a character in Mega Man Maverick Hunter X. She is the navigator for Mega Man X as he fights to stop Sigma’s rebellion. She is a superior model compared to her peers. [2]

In The Day of Σ, she briefed X and Zero, alongside the other Maverick Hunters, about discovering the location of the hack source for a Maverick attack that morning, and that Sigma had ordered for them to be dispatched to the location. She later informed them of Vile's escape from prison just as they were about to deal with another Maverick attack. She later lost connection to Sigma, and then informed them that Sigma disappeared, and that they should head to the missile base to investigate. She later discovered alongside the other navigators an unauthorized missile launch from the missile base, and worked to trace the missile's target. She ultimately discovered, to her horror, that the target of all the missiles was in fact Abel City.

In the main game, she acted as X's operator, telling him to dispatch of Sigma's lieutenants, and afterwards telling X that Zero managed to trace Sigma's main base of operations.

She was briefly seen in a flashback to the events of the Day of Sigma in "The Choice" b-story in Mega Man #50 by Archie Comics during Worlds Unite. She only has one line in the comic, where she tells Zero that she hasn't gotten any responses from either Flame Mammoth or the rest of the 4th Overland Unit, and then interrupts herself and mentions getting reports that Launch Octopus as well as his 6th Marine Unit may have joined the then-recently-turned Maverick Sigma, to Zero's shock.

Navigator concepts for Maverick Hunter X and The Day of Σ. 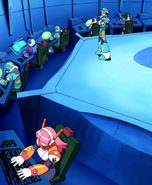 Several navigators in The Day of Σ. 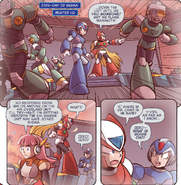 A Navigator and Maverick Hunters seen in the Archie Comics Mega Man comics.
Add a photo to this gallery

Retrieved from "https://megaman.fandom.com/wiki/Pink-Haired_Navigator?oldid=326586"
Community content is available under CC-BY-SA unless otherwise noted.