"It is useless to beg for mercy!"
—Pirate Man, Mega Man & Bass database

Pirate Man (パイレーツマン, Pairētsuman) is a Robot Master from Mega Man & Bass whose appearance and motif is that of a pirate captain. Serving as a loyal and faithful member of King's robot army, he was created and assigned to attack cargo vessels at sea. It's believed he was the one responsible for many of the attacks on ships that occurred during King's rebellion against humanity. Pirate Man and Dive Man don't get along very well, as they prefer opposite principles regarding the sea; Pirate Man is unscrupulous while Dive Man is more honorable.

Pirate Man's stage is one of the two stages unlocked by defeating Cold Man (the other stage being Burner Man's). His stage is located at the bottom of the ocean and he fights underwater in a room containing his treasure hoard. Pirate Man's Special Weapon is Remote Mine, a remote controlled bomb that he usually fires three times in a row.  He can also attack by encasing himself in a giant bubble and bouncing around the room; this attack can only be used when the water level is high enough, and he'll use his arm to refill the room when the water level gets too low to use his bubble attack. If he is hit by his weakness, Burner Man's Wave Burner while using his bubble attack, the bubble will burst and Pirate Man will fall to the floor in a comical manner.

Befitting his overall status as a pirate captain, Pirate Man is fearless and ruthless when it comes to his lifestyle and will do whatever it takes to reach his goal while holding and maintaining a cruel and unforgiving personality. He loves making and achieving profitable money when it comes to his nefarious activities while disliking the concepts of fairness.

The room is flooded, so the player can use the game's water physics effectively here (Mega Man and Bass can jump higher while in the water, making it easy to evade attacks), though the water will slowly descend as the battle goes on. Pirate Man will start off the battle by firing Remote Mines or encasing himself in a bubble to bounce around the room. The mines follow the player before stopping and exploding, leaving behind a long-lasting blast radius. He will continue doing these two moves until the water gets low enough, after which Pirate Man will raise the water level. Pirate Man's weakness, the Wave Burner, is useful as it can interrupt his bubble attack, though it does more damage if used outside of the water.

Amount of damage in units that Pirate Man receives from each Special Weapon in Mega Man & Bass.

Pirate Man and King's other robots appear in the Rockman 8 manga. They leave shortly after their appearance, with the exception of Pirate Man, who stays to chase the Green Devil.

Pirate Man appeared as a character in Sonic the Hedgehog #250 alongside an army of other Robot Masters. Due to the effects of the Genesis Wave launched by Dr. Wily and Dr. Eggman, he appeared in the Skull Egg Zone after previously battling Mega Man and being time-cloned by the two doctors. During the battle, he is known to have engaged Blaze the Cat (undoubtedly a nod to the antagonism between Blaze and a group of robotic pirates in the Sonic games, as well as his own weakness to a fire based weapon). As a result of this, he debuts quite some time before any adaptation of Mega Man & Bass.

Pirate Man also cameoed in the Archie Comics Mega Man series in one of the "Short Circuits" mini-segments during the Worlds Collide crossover with Sega's Sonic the Hedgehog. In the short, he takes part in "the obligatory pirates vs. ninjas" battle paired with Captain Whisker from the game Sonic Rush Adventure against Shadow Man and Espio the Chameleon. 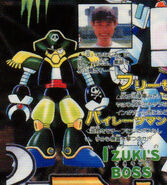 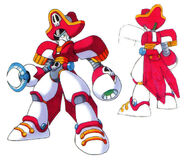