MMKB
Register
Don't have an account?
Sign In
Advertisement
in: Shield weapons, Special Weapons in the classic series, Mega Man 6 items,
and 4 more

Plant Barrier (プラントバリア, Puranto Baria) is Plant Man's Special Weapon. It is a barrier of condensed energy shaped like flower petals that spins around the user and protects him from some attacks.

The Plant Barrier vanishes when hit by any attack, and Mega Man can't throw it. It is Tomahawk Man's weakness, and is also effective against the Rounder II, although Flame Blast and Power Mega Man are usually preferred as the Rounder II deals a large amount of damage on contact and the player cannot safely slide or jump over them.

Plant Barrier won't vanish after hitting an invulnerable or shielded enemy. In fact, it will ignore shielding and cause heavy damage to boot, making the weapon an effective counter to the Shield Attacker GTR and Brown.

The Plant Barrier can hit several times before vanishing, and the user can throw the shield at enemies. It is Dust Man's weakness.

The Plant Barrier can be obtained by the player that takes the Special Weapon Item dropped by Plant Man after defeating him in the "Search for Wily!" course. It works in the same way as its appearance in Mega Man: The Power Battle. Gyro Man is weak to this weapon.

Plant Barrier is used by Mega Man in the fighting game Super Smash Bros. for Nintendo 3DS / Wii U as a custom move for his down special, Leaf Shield. It must be unlocked before it can be swapped out.

An orbiting shield of petals surrounds Mega Man to protect him. Unlike the Leaf Shield, the petals do not disappear upon contact with a foe or an opponent and circulate around the user in a wider area, and the shield does 4% damage when orbiting and 5% when thrown and inflicts slightly more hitstun. However, the downsides of this move are that it takes longer to activate (leaving Mega Man wide open to attack) than Leaf Shield, does not last as long, and does not nearly fly as far when thrown. It is riskier to use due to slower startup and is not as effective at longer ranges but can potentially net a bigger reward, as the wider hitbox makes it easier to grab opponents and it becomes easier to interfere with recoveries of certain characters, all the while dealing more damage.

In the manga, Plant Barrier scatters bits throughout the electromagnetic field surrounding Plant Man. The Copy Mega Man attempted to use Plant Barrier in his battle against the original Mega Man, but Plant Man tells Mega Man to charge in as it takes time for the barrier to set up, hitting the copy before he activates it. 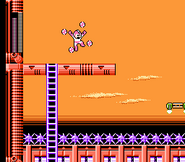 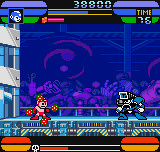