Plant Man (プラントマン, Purantoman) is a Robot Master from Mega Man 6 designed as a flower, which can be used as camouflage. He was originally created as a keeper of a botanical garden, and is said to be able to communicate with plants. Because of his popularity, he became the mascot of the garden. After hearing of the First Annual Robot Tournament, he was modified for combat and equipped with the Plant Barrier, a Special Weapon that creates a barrier of energy that takes on the appearance of spotted flower petals. In the tournament, he was reprogrammed by Mr. X to help him in his plan to conquer the world.

As both an expert botanist and flower fancier, Plant Man has a dainty personality and is quite sensible when it comes to plant and flower life, which can often lead to him getting depressed quite easily at times when it comes to the destruction of nature. In his spare time, he enjoys sunbathing in order to help recharge himself via solar energy while disliking honey bees due to the fact that they often mistake him in being a real flower.

Plant Man is one of the eight bosses. His pattern consists of activating a Plant Barrier, jumping, throwing it at Mega Man while standing in place, and running at him when the Plant Barrier leaves the screen, then repeating the pattern again from start. The player has to stay in the side of the room where there is more space for Mega Man, then jump over the Plant Barrier and shoot at Plant Man while still having time, and finally jumping to avoid contact damage when he runs at Mega Man.

If the Power Adaptor is used fully charged against him after throwing his Plant Barrier, it will cause him to jump again, without a barrier, and he will resume his pattern of attack. Interestingly enough, when he lands, the barrier firing sound will play again.

Plant Man is one of the six bosses from the "Mega Man 3~6" course, being fought in the Wily Land. Besides using Plant Barrier like Mega Man 6, Plant Man can shoot with his buster, drop four petals while jumping, and release blue seeds that bloom into small flower enemies in his likeness that can interfere with the fight by getting him in Plant Man's place and firing projectiles from the mouth. His weakness is Gyro Attack.

"The Plant Barrier is powerful. The opponent's attacks will be useless. Burn him with the "flame" weapon."
—Dr. Light

Plant Man is one of the six bosses from the "Search for Wily!" course. He behaves similar to the previous game, but with improved attacks. His weakness is Atomic Fire.

Plant Man's pattern depends on the order the bosses are fought. Regardless of the order, Plant Man will primarily focus on using buster attacks and sowing the small plant enemies. The plants can't turn, firing only on the direction they are facing.

If Plant Man is the first boss, he can either fire one bullet straight ahead or quickly fire in five directions. After losing half of his health he will fire two bullets instead of one. His small plants fire the same amount of projectiles as his straight shot.

If Plant Man is the last of the six bosses, he will fire three bullets straight ahead instead of one. As his small plants have the same fire rate, they become faster and more dangerous.

If Plant Man isn't one of the first bosses fought, after losing half of his health he will start using Plant Barrier. Instead of a set pattern, his timing and jumping vary before launching Plant Barrier. He can also launch Plant Barrier in the player's direction while jumping. Also, his straight shot will have four bullets instead of three, and the plant enemies he creates will change. Instead of dropping the seeds on the ground, they are released on the air, creating flying plant enemies that "bounce" around and drop petals. 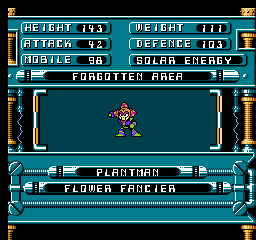 Mega Man Legacy Collection text: Once a mascot for a botanical garden. He doesn't have many ways of attacking, so he should be easy to beat.

Displays the amount of damage in units that Plant Man will receive from each Special Weapon in Mega Man 6.

Plant Man appears in the story "The Strongest Enemy to Date" in the manga, where he is a robot from South America that entered in the first World Robot Championship.

He also appears in Mega Man Gigamix in the story "Moon of Darkness", where he is defeated by Venus.

Prior to Plant Man's debut appearance in the Mega Man Archie Comics storyline proper, he did appear in the crossover arc Worlds Collide, specifically in Sonic the Hedgehog #250 briefly, where he was elbowed in the face by Sonic. He eventually had his first true appearance in the series in Issue 28 of the series proper, being the fourth Robot Master to have a true early appearance before their respective story arc (the first was Pharaoh Man, second was Concrete Man, and third was Splash Woman), where he was one of the robots affected by Ra Moon's EMP wave. The same issue also revealed that Pedro Astil was his creator, though Dr. Light apparently helped with his design. In Issue 29, because of Plant Man's design being partially organic, he barely survived the EM wave and was instrumental in reactivating Mega Man and the other Light Robots. In issue 31, his serial number (at least prior to the events of Mega Man 6) is revealed to be DAN-001 (presumably meaning "Doctor Astil Number-001").

He later accompanied Mega Man, alongside Astil, Drs. Light and Cossack, Pharaoh Man, Roll and Rush, to the Lanfront Ruins to investigate the truth behind the blackout, as well as whether Wily was truly one of Ra Moon's victims or the instigator. Their findings seemed to verify Wily's story, and Dr. Astil came to a degree of closure over his previous experiences in the ruins.

Plant Man also appeared in the Rockman 6 manga, and is in exposition in the robot museum from the Rockman & Forte manga.

Front, side, and back view of Plant Man. 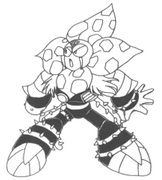 Plant Man in the manga Rockman 6. 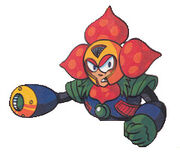