Plesio Surf, known as Brachio Wave (ブラキオ・ウェーブ, Brachio Wave) in Japan, is a character from the Mega Man Star Force series. He is the EM Wave Change between Gerry Romero and the UMA Plesio. Plesio is based on the plesiosaur.

Plesio is given to Gerry by Hyde to stir up trouble in Loch Mess. Gerry sees this as an opportunity to boost the ratings for his show using Plesio to pose as the legendary Messie. They EM Wave Change and attack Mess Village, but is defeated by Geo Stelar and Omega-Xis (as Mega Man).

Later on, while copies of Plesio harass the people throughout the world, Plesio Surf returns again on the Mu continent, using a Murian to perform an EM Wave Change, and attempts to stop Mega Man from proceeding. This Plesio Surf is also defeated.

Plesio is a resident UMA to Dombler Lake (Loch Mess), and prefers the peace and quiet he had before the rumors of a monster named "Dossy" (a reference to "Nessie", the real world's Loch Ness Monster) surfaced. Since then, there were always people near his lake trying to look for "Dossy". When Gerry arrives, he first spots Plesio, and Plesio forcibly Wave Changes with him to Plesio Surf and attempts to scare people off.

Geo Stelar and Sonia Strumm travel there to find Zack Temple, who tells him about Plesio. When Geo reaches the lake, Plesio makes an appearance and attacks the nearby people who have come to see "Dossy". Since then, people have started to believe in "Dossy" and they start selling "Dossy" merchandise. Plesio Surf then begins to attack the stores to drive the people out, but Mega Man and Harp Note appear to stop him. Eventually, in the midst of the chaos, Rich Dotcom steals the OOPArt from the lake and runs away with it generating the image of a plesiosaur that dissipates after he leaves. This results in people thinking that "Dossy" has left the lake, and so the crowd disperses over time. Plesio is now satisfied with the calm that has returned to his home, and does not think much of the loss of the OOPArt.

Plesio Surf will always begin the battle with two stones in the area. One will constantly move from side to side to obstruct the player.

Plesio Surf cards and Torrent Wave can also be used with Blank Cards.

Plesio Surf cards and Torrent Wave can only be obtained as Illegal Cards. 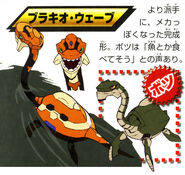 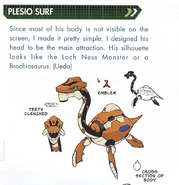 Plesio Surf in the anime (known as Dossy/Loch Ness).
Add a photo to this gallery

The name Plesio Surf is derived from Plesiosaurus (the Loch Ness Monster being rumored to be one) and the wave activity surf.

Retrieved from "https://megaman.fandom.com/wiki/Plesio_Surf?oldid=293057"
Community content is available under CC-BY-SA unless otherwise noted.