This PET appears in the original 56-episodes of the MegaMan NT Warrior anime series. It was used to combat the WWW and Gospel organizations as well as participate in the N1 Grand Prix. In the first episode Lan is seen using a normal navi with his Plug-in PET, later he gets a package from his father with a disk containing MegaMan.EXE, from then on MegaMan resides inside of Lan's PET. In the show, Navis are shown to be able to travel from their PET into the PET of other operators. The Plug-in PET is shown to have many accessories including holsters, battle chip cases and docks. The Plug-in PET is used until the first episode of MegaMan NT Warrior Axess. 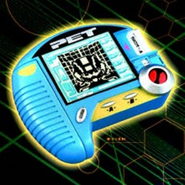 Retrieved from "https://megaman.fandom.com/wiki/Plug-in_PET?oldid=227675"
Community content is available under CC-BY-SA unless otherwise noted.