Plug Man (プラグマン, Puragu Man) is a Robot Master from Mega Man 9 that Dr. Light created to inspect the quality control in a television factory, strictly inspecting each unit. He is obsessed with gadgets and loves to browse electronic stores like Akihabara and talking with his friends about geeky subjects. His Special Weapon is the Plug Ball.

Plug Man is one of the eight Robot Masters whose period of use had expired and was scheduled to be scrapped. Dr. Wily pretended to be concerned by offering to repair them, reprogramming the tricked robots to help him conquer the world.

Plug Man will jump around trying to jump on Mega Man or Proto Man. At times, he will shoot Plug Balls at Mega Man that will run on the ceiling. Once he is under the ball, it will drop toward him.

His weakness is the Jewel Satellite, which will deflect all Plug Balls launched.

In the end credits picture, he is seen going shopping with Rush, having been rebuilt after the events of the game.

Displays the amount of damage in units that Plug Man will receive from each Special Weapon in Mega Man 9.

Plug Man's stage consists of many Appearing Block puzzles similar to those in previous games like Elec Man's and Heat Man's stages. There are also video holograms of the player's character that cause damage on collision.

Plug Man appears in the short manga story "For Whose Sake?" included in the booklet of Rockman 9 Arrange Soundtrack.

Plug Man appeared in the Archie Mega Man comics before the adaptation of his game in the Worlds Collide crossover event. In it, he joined a massive Robot Master army that did battle with Mega Man and Sonic the Hedgehog as well as their allies. During a fight with Knuckles, Plug Man was knocked into Spark Man and Bright Man, shocking and destroying all three.

Plug Man in the ending credits of Mega Man 9. 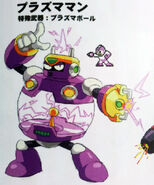 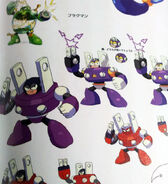 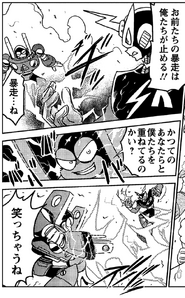 Plug Man profile in Rockman Maniax.
Add a photo to this gallery

Retrieved from "https://megaman.fandom.com/wiki/Plug_Man?oldid=321023"
Community content is available under CC-BY-SA unless otherwise noted.