The Alpha Bear of the Ice Blade
(氷刃の熊将 Hyoujin no Kumashou)

Poler Kamrous (ポーラー・カムベアス, Pōrā Kamubeasu, roughly "Polar Kambeas") is one of the bosses of Mega Man Zero 2 and a member of Fairy Leviathan's Deep Sea Squadron.

Poler is a female[1] Mutos Reploid based on a polar bear, part of her name being possibly derived from Kamuy (カムィ, Kamuy bears are worshipped as Kamuy by the Ainu). She speaks in a turbid way and has a gruff voice.

Zero had the mission to sabotage a computer in Antarctica that controls the defense system of Neo Arcadia, weakening the defense enough to carry out Elpizo's "Operation Righteous Strike". Poler Kamrous was the guardian of the computer room, which is set to -20c°, and there are four cooling systems throughout the stage. Destroying them increases the mission points and the temperature of the computer room to a maximum of 5c°. After the mission, all ice hazards (slippy surfaces and spikes) inside the facility will disappear. 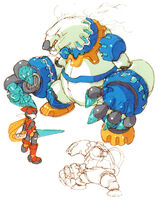 Poler's early concept art.
Add a photo to this gallery

Retrieved from "https://megaman.fandom.com/wiki/Poler_Kamrous?oldid=293784"
Community content is available under CC-BY-SA unless otherwise noted.