The stage begins in an area with many Trappers and elevators. One particular elevator pulls X down into a spiky pit where the only choice is to enter the warp to the Vile Stage, and might be better off avoided. After the elevators section, X crosses a bridge that leads to a sub-boss room for Bit or Byte; after that is a large room with orange floors and a electric bars on the walls. This section then leads to Volt Catfish's boss room.

The Hydroelectric Power Plant on Laguz Island is very different from the Power Control Center, appearing as part of X Mission. Its design instead draws inspiration from Boomer Kuwanger's Tower Stage, and it takes layout sections from Toxic Seahorse's Giant Dam Stage such as the vertical waterfalls segment. There is also an extra section where deadly waves will periodically wash over the bottom of the screen, forcing the player to wait and avoid them.

The Power Control Center is the twelfth stage from the Story mode. 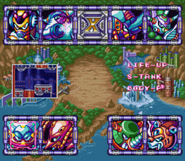 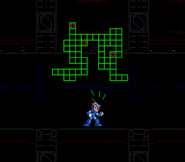