A Press (プレス, Puresu) is an indestructible press device that appears as a trap in many Mega Man games and attacks by trying to crush the player's character. Unlike the hazard, the enemy is not lethal.

Press (プレス, Puresu) is a spiked press that appears in Metal Man's stage and in the final stages. It is a security device with a sensor that detects incoming intruders and falls when they are close. Although they can't be destroyed, Time Stopper can stop them for a short period of time, allowing Mega Man to pass by them safely. However touching them while they're frozen with the Time Stopper will still cause massive damage.

They also appear in Mega Man: The Wily Wars in both 2nd and 4th Wily Tower stages.

Needle Press (ニードルプレス, Nīdoru Puresu) is a giant needle that stays hidden in the ceilings of Needle Man's stage and detects intruders with a sensor, piercing anyone who gets too close.

It also appears in Mega Water S's stage in Mega Man: The Wily Wars. Interestingly enough, this is one of the few obstacles other than bosses to be immune to the Time Stopper.

Mega Man 7
A Press with a different design that appears only in Shade Man's stage in Mega Man 7. They try to crush Mega Man if he gets under it. Batton M48s also appear in the area to make it more difficult to dodge the presses.

Presses appear in Mega Man #11, and Needle Presses can be seen in Sonic: Worlds Unite Battles #1 as one of the hazards in the Sky Patrol's training room.

Presses appeared in Rockman: Dr. Wily no Inbou and the Rockman 7 manga. 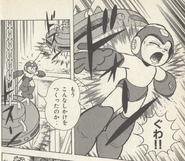 Press in the Rockman 7 manga