Mega Man 11
Press Don (プレスドン, Press Don) is a powerful fighting robot that appears as an enemy in Mega Man 11. Press Don attacks by jumping into the air and using its rocket jets to fly for as long as it can before crashing to the ground. If Mega Man tries to run or slide under a Press Don, it can turn off its jets early to try and crush him. If a Press Don doesn't land on Mega Man, it will try to punch him with a giant fist that emerges from its stomach region. 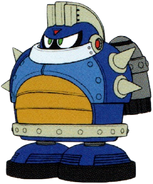