She makes her first appearance in The Bedroom. She is the princess of Creamland, one of the first countries to go online. However, due to Creamland's small size, when bigger countries went online, Creamland was overshadowed and forgotten by the world. She attends an Official NetBattler conference, discussing the actions of Gospel. However, all the members present for the conference fell into a series of traps, including Lan, Chaud, and herself. She attempts to kill all of the attending Official NetBattlers and makes it seem as if she died in a trap, but it is later revealed that she set all the traps. After MegaMan defeats her Navi, KnightMan, she falls into one of her own traps and needs to go to the hospital.

By Mega Man Battle Network 5, Princess Pride has turned over a new leaf. She is now trying to bring Creamland back to its former glory by mining Magnometal on Oran Isle after the incident with Gospel. However, KnightMan goes out of control, and Lan and MegaMan are forced to stop him. Afterwards, Pride joins Team Colonel and helps them liberate the Oran Area. She participates in other battles and gives Lan an invitation to a party that she doesn't plan to attend. Later, her mind is taken over by the power of the Soul Server and attacks Lan, but returns to normal after it is destroyed. She joins Team Colonel in the attack on Nebula's base and returns to Creamland after the final battle.

In the anime, Pride is a completely different character compared to her appearance in Battle Network 2, and has a strong sense of justice. She first appears in the anime disguised as a boy named “Whip”, who spends the day with Lan Hikari. She appears once more when KnightMan.EXE goes out on control, and later on becomes a member of the Cross Fusion Members in Rockman.EXE Stream. 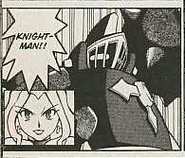 Princess Pride and KnightMan.EXE in Mega Man NT Warrior (manga).
Add a photo to this gallery

Retrieved from "https://megaman.fandom.com/wiki/Princess_Pride?oldid=351136"
Community content is available under CC-BY-SA unless otherwise noted.