"You can ask me a hundred times! Even a thousand times and it won't matter! I'll never help you build weapons of war!"
―Professor Gaudile, Mega Man X: Command Mission

Professor Gaudile or Dr. Gaudile (ガウディル博士, Gaudiru Hakase) is a character in Mega Man X: Command Mission. He was a renowned specialist in complex energy theories and an accomplished engineer, later becoming the lead Force Metal researcher in the Gigantis Island region.

When the Rebellion Forces started their activity, Gaudile isolated himself in a mechaplant forest facility and used it as a laboratory. He created Cinnamon, as well as the Force Metal Generator. Gaudile apparently has history with Dr. Psyche as a colleague, but wants to create things to help others and not make tools for war, unlike Dr. Psyche, who wanted his creations to be used in the Rebellion Army. Since Gaudile created Cinnamon himself, he tends to worry and dote on her as if she was his own daughter. He moves from his lab to Central Tower after X confronts Dr. Psyche and remains to assist X's party thereafter. 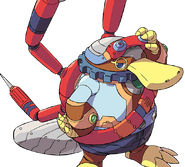 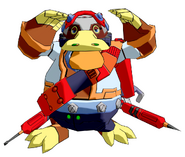 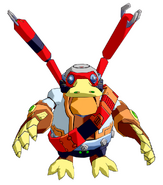