"It seems that the Biometal has attracted a bug. Shoo, pest."
―Prometheus to Ashe before he attacks, Mega Man ZX Advent

Prometheus (プロメテ, Puromete) was a mysterious character from the Mega Man ZX series. He and his sister Pandora are servants of Model W. He is a Mega Man who is feared by the Hunter's Guild as the "Grim Reaper".

As shown in ZX Gigamix, Prometheus was originally an ordinary male Reploid with a youthful appearance. He has sharp red eyes and spiked, pale blue hair styled as a mullet with a long pair of bangs. He wears a purple jacket with details in red on top of a black and white bodysuit.

As a Mega Man

Prometheus's body underwent drastic physical changes after being permanently merged with a fraction of Biometal Model W. In this state, his body is almost entirely covered by purple armor with details in red on top of a robotic gray body. His long helmet has a white plate in the front evoking the image of a skull, and his hair is now a pale blue cape split in vertical segments.

Although Prometheus is capable of effective teamwork with Pandora, he is a powerful warrior on his own, able to easily wield a beam scythe larger than his own size in battle. Perhaps his strangest feature is his cyan polymorphic 'hair' which he uses to attack his enemies by stretching and planting it into the ground, jutting upward in spear-like motions. He can also change his colors when he uses fire-based attack. He is also a very skilled pyrokinetic, able to produce and manipulate flames at will as his armor color changes to red. The flames themselves may be purple or red, and occasionally take on ominous shapes.

Always with a sadistic expression on his face, Prometheus's figure exudes evil; he shows absolutely no mercy in battle, unless he is dealing with somebody of interest to the Game of Destiny. He tends to mock his opponents and make snide remarks when confronted. Prometheus is an arrogant fighter who enjoys nothing more than senseless killing and a good battle (ironically, when Ashe/Grey defeats him and his sister, he hints that his having to do senseless fighting was one of the reasons as to why he and his sister wanted to betray and kill Albert in the first place.). He also seems to hold a grudge against Vent/Aile and refers to him/her as a pawn in his game. His personality has yet to be further explored, and neither has his connection to Ashe. As the 'voice of Model W', he seems to have inherited Dr. Weil's insanity and sadism. He also apparently has a self-loathing attitude towards himself, as he openly calls himself and his sister "the garbage that Albert left behind" just before trying to goad Ashe/Grey into killing them.

Prometheus is the first of two sibling Reploids created by Master Albert, identified as DAN-001, as part of his plan to awaken Biometal Model W and become the ultimate Mega Man. Initially made as regular Reploid children, Prometheus and his younger sister Pandora were constantly tortured through perpetual confinement, eventually Prometheus and his sister managed to temporarily escape Albert's control,[1] until the day Master Albert permanently merged the two with fragments of Model W and commanded them to match Albert's Chosen Ones with Biometals to leaves him no choice but to participate in the Game of Destiny in order to seek out and confirm the strongest Mega Man there is.[2] Bound to Albert by a limited lifespan, Prometheus followed Albert's orders for centuries in exchange for the possibility of returning to his capsule to reset his life cycle at regular intervals. Resentful of their suffering at Albert's hand, Prometheus and Pandora patiently awaited the chance to exact revenge on their creator.

After Serpent had excavated the Biometals Model H, Model F, Model L and Model P prior to the games events, Prometheus and Pandora approached Serpent. Several company workers mentioned that after their meeting, both Serpent and Slither Inc. changed their way of business. After Serpent strikes down Girouette in Area D, Vent/Aile attempt to shoot Serpent down in anger but their charged shots are easily deflected by Prometheus and leaves, mocking Model X and Z as mere legends while Pandora steals the passwords to the Model W core from Model X and Model Z under Serpent's orders. The three leave both Girouette and the protagonist for dead, while they resume their efforts to awaken Model W.

After four Pseudoroids are defeated, Prometheus and Pandora are sent by Serpent on board a Slither Inc. fleet with orders to eliminate the Guardians. Although the two manage to reach the reactor of the Guardian HQ, they meet opposition from Vent/Aile, who not only survived but also obtained Model Z and performed a Double Megamerge, becoming the more powerful Mega Man Model ZX. After engaging the Mega Man ZX in one-on-one combat, Prometheus decides to retreat with Pandora, although he claims to be sparing the Chosen One's life.

Prometheus is seen one last time with Pandora heading a Maverick attack on Area O in an effort to gather the Cyber-elves to feed the recovered Model W core. This time, he and Pandora join forces against Vent/Aile, but even the two are unable to defeat Mega Man ZX. It is revealed, however, that Prometheus and Pandora were manipulating Serpent from the beginning, taking advantage of Serpent's weak will. The two retreat again, remaining absent during the final battle against Serpent,[3] although not before alluding to they're all being pieces of "his" game.

"He said Mega Men are the natural evolution of man!? Don't make me laugh! What an epic sham!"
—Prometheus to Grey/Ashe

Years after Serpent's fall, Prometheus appears in an attack against a Raider airship, seeking the Biometal Model A recently discovered inside ruins. However, he is confronted by Ashe and the Hunters. Although Prometheus easily dispatches the group, the Hunter's Guild manages to retrieve the Biometal.

Prometheus joins Pandora and soon makes another attempt at retaking the Biometal by attacking the train transporting the container to Legion. He later expresses annoyance at Ashe being the one guarding Model A[4] (if the player is playing as Grey, Prometheus will instead chastize Pandora for failing to kill him[5]). This second attack is thwarted by the protagonist (either Ashe again or Grey), who uses the Biometal to transform into the Mega Man Model A. In light of this development, Prometheus reconsiders his mission and instead enlists the new Mega Man into the Game of Destiny before leaving with Pandora.

After Master Albert is uncovered as the creator of Model W, Prometheus is one of the Mega Men sent to retrieve the scattered Model Ws. He is found retrieving one fragment in the Control Center, and again alongside Pandora in the Waterfall Ruins, after the two destroyed the local computer (which had been used to erase information about the protagonist from Legion) to prevent the Mega Man Model A from accessing the data. Before leaving, however, he also lets slip that he and Pandora intend to backstab Master Albert very soon.

When the Mega Man Model A finally finds Albert in his hideout, Prometheus and Pandora take advantage of this unexpected development and the Grim Reaper, upon noting that Albert looked "uglier in person than [Albert] did on that monitor," slays Albert himself, revealing the duo's hate and desire for revenge. Determined to destroy everything that Albert ever made (including themselves, as indicated by his use of "Go out with a bang"), Prometheus and Pandora fight the Mega Man Model A, but this leads to the two falling prey to Albert's true plan: the data accumulated by centuries of hatred is completely absorbed by the surrounding Model Ws, awakening all the fragments. Albert himself reappears in a new body called "DAN-000", revealing that the one slain by Prometheus was a decoy and the betrayal was expected as the final step of his plan. As the Model Ws merge to create Ouroboros, the protagonist grudgingly escapes the collapsing structure (with Ashe even apologizing for having to leave the two behind), leaving the unconscious Prometheus and Pandora behind to survive and stop Albert at a later time.

Although Albert is eventually defeated, the situation of Prometheus and Pandora remains unknown. They are highly speculated to have survived the encounter, however considering their short expiration dates, they may have not survived long assuming they couldn't wake up in time to restore their energies..

Despite the fact that Prometheus is a Mega Man who is not directly based on any character within the Mega Man canon, he exhibits traits of two X Guardians: like Fefnir, he possesses absolute control over the fire element, and demonstrates this through long range attacks such as creating flaming skulls in the four corners of the screen to fire blasts through them with certain consistence, creating fire pillars which move around the screen, and creating flaming swords which travel around the walls and the floor; and like Phantom, he possesses a high degree of speed and stealth, which he incorporates into his style of fighting by teleporting relatively often, which involves dash-slashing in a fashion similar to Phantom, albeit with a scythe rather than a blade. In addition, Prometheus also displays a few traits of Zero, being proficient with his scythe (which resembles an elongated Z Saber/ZX Saber handle, the blade itself coming from the side of the "hilt" rather than the top) and having a blue, triangular "cape" coming from the back of his helmet that resembles a more rigid version of Giro's long hair. Thus he could be considered a "mixed" Mega Man, with Pandora having opposite features in common with the other two guardians (whose elements are ice and electricity) and being a long-ranged fighter, making the pair effective and deadly compliments in battle.

The attacks used by Prometheus in Mega Man ZX. For the Cross Finale he uses with Pandora in Area O and their Mega Man ZX Advent attacks, see Prometheus and Pandora.

Prometheus and Pandora are featured in the soundsketch "Death and Witch", as well as "Girls Bravo" in a fight against Aile.

Prometheus's role and personality in the manga are largely the same as the game, although the events are slightly different. Following Vent's transformation into the Mega Man Model ZX, Prometheus appears in chapter 06 discussing Vent's victory over Hivolt with Pandora. When Lurerre is defeated, Prometheus plans out the attack on the Guardian Base under Serpent's orders, sending Fistleo and Hurricaune to attack Vent while Protectos and Leganchor strike the docked airship in Area G.[6]

Though Vent eventually defeats all the Pseudoroids, he arrives too late as Prometheus holds Prairie captive while threatening to cut her neck. However, Pandora dissuades him with the argument that she incapacitated the base and their mission is a success. The two retreat with Prometheus promising to settle the fight with Vent at a later time.[7]

Prometheus and Pandora later observe Vent's fight with Purprill from a distance, criticizing him for challenging the Mega Man Model ZX without their permission and deciding to leave the Pseudoroid to his fate. When Vent later follows Flammole into Slither Inc.'s head office, Prometheus executes the Pseudoroid for luring Vent before clashing with the Chosen One, taunting him with Giro's death to feed Model W with Vent's anger.[8] When the Biometal is restored, Serpent dismisses Prometheus and Pandora and challenges Vent, although the two are defeated when Vent gains his second wind and strikes the two with the power of his Biometals.[9] The two escape and watch Serpent's defeat from afar, claiming that there is always a next time before disappearing.[10]

Prometheus and Pandora on the train that was carrying Biometal Model A.

Prometheus and Pandora before they fight Grey or Ashe.

Prometheus and Pandora in their Reploid forms. 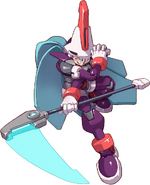 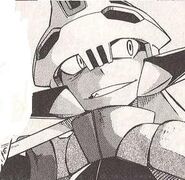 Prometheus in the manga. 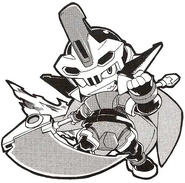 Chibi
Add a photo to this gallery

Retrieved from "https://megaman.fandom.com/wiki/Prometheus?oldid=350607"
Community content is available under CC-BY-SA unless otherwise noted.