Proto Man's Castle, known as Blues Castle (ブルース城, Burūsu Shiro) in Japan, is a fortress that appears in Mega Man 5 after the defeat of all eight Robot Masters. The castle consists of four parts, each part being a stage Mega Man must go through to save Dr. Light from Proto Man. Despite the name, it wasn't actually built by Proto Man, instead being built by Dr. Wily as a secondary base used by the four Dark Men, one of them being a Proto Man impostor created by Wily to frame Proto Man. In the last stage, the real Proto Man appeared and revealed that the other is an impostor. 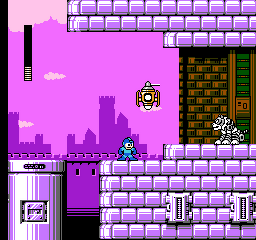 The first stage from Proto Man's Castle is outside of a castle-like area with a pink sky, suggesting it's getting dark. 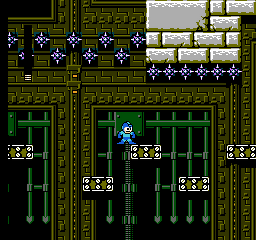 The second stage is inside a high-tech castle with pits, spikes and conveyor belts. 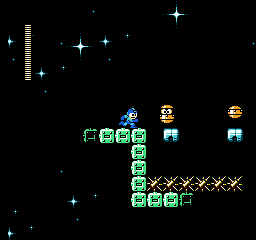 The third stage is the castle's rooftops at night. 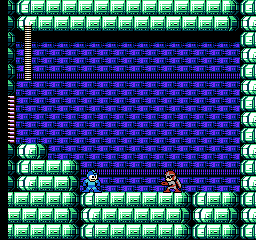 A short stage inside a collapsing tower with spikes and no enemies. In the top of the area Mega Man fights Dark Man 4. After his defeat, Dr. Wily reveals he tried to frame Proto Man and Dr. Light is captive in his Wily Castle. 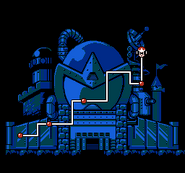 Proto Man's Castle in the Rockman 5 manga.
Add a photo to this gallery

Retrieved from "https://megaman.fandom.com/wiki/Proto_Man%27s_Castle?oldid=322667"
Community content is available under CC-BY-SA unless otherwise noted.