Almost all the games from the
Mega Man classic series

Proto Man, known as Blues (ブルース, Burūsu) in Japan, is the first Robot Master created by Dr. Light and is considered the "brother" to Mega Man and Roll. He first appeared in Mega Man 3 training him to see if he could beat Wily, aiding Mega Man in his fight against evil.

Proto Man was intended to become the first humanoid robot capable of independent thought and reasoning.

Being a prototype robot, Proto Man's design was not complete. It was later discovered by Dr. Light that Proto Man had a dangerous imbalance in his energy core that would eventually kill him. However, being created too independent, not having another of his kind to interact with and severely troubled by his incomplete status, Proto Man had begun growing distrust for the good doctor. Fearing Light would change his character, Proto Man refused to have Dr. Light meddle with his systems and went missing.

Dr. Light had presumed Proto Man to have died and regrettably gave up on him. Learning from his mistakes, he perfected the energy core and created sibling units Rock and Roll. Proto Man's design became the basis of the Sniper Joe series of robots. In Mega Man Powered Up, it is revealed that Proto Man despises the Sniper Joe series due to this.

Knowing the time of his demise, Proto Man wandered the world alone. Before his energy reactor was completely depleted, he was found by the exiled scientist Dr. Wily. Dr. Wily managed to temporarily repair Proto Man by altering his energy core from a solar to a nuclear one, as well as making other modifications, turning him into a combat robot. He also gave Proto Man his now-trademark visor in an attempt to hide his identity from Dr. Light.[1] Presumably, working on Proto Man's systems gave Wily greater knowledge in creating robots, helping his plans for world domination along.

Indebted to Wily, Proto Man served him under the alias of Break Man.[Citation needed] He did this until his encounters with Mega Man in Mega Man 3 made him realize the true nature of Dr. Wily. Proto Man turned on Dr. Wily, aiding Mega Man but refusing help from Dr. Light, still holding onto his feelings of distrust.

Proto Man's signature whistle is a staple of the character and almost always plays before his appearance.

Although Proto Man has no involvement in the story, he is a unlockable playable character that is unlocked after beating all mission modes, or downloading him. He uses his Proto Shield to block attacks like Mega Man in Mega Man 7. His shield can also be knocked off by enemies, although it can fall off in extreme circumstances. All Proto Man has to do is pick it back up. In this game, he has advanced jumping and mobility, but cannot slide, copy weapons or charge his buster like in other games. However, instead of the Proto Buster, he has a new skill - Proto Strike, which is virtually the same as Mega Man's charge shot and can be shot rapidly.

In the version of Mega Man 3 that was featured in Mega Man: Anniversary Collection and Rockman Complete Works, Proto Man plays the role of Mega Man's navigator.

Proto Man rescues the kidnapped Kalinka and brings her to Mega Man and her father, Dr. Cossack, after Mega Man defeats him, to let her tell Mega Man that her father was forced to build the eight Robot Masters for Dr. Wily.

Proto Man was framed for a robot attack and kidnapping Dr. Light. Mega Man later finds out that Dr. Wily created a robot called Dark Man to impersonate Proto Man. Proto Man appears to reveal the deception and later helps Mega Man near the end of the game by helping lift the roof of Dr. Wily's castle when Mega Man saved Dr. Light.

Proto Man appears in Tomahawk Man's stage to give him the Energy Balancer upgrade. With it, when Mega Man collects weapons energy with the Mega Buster equipped, it restores the weapon with the least energy in it.

Proto Man appears in Cloud Man and Turbo Man's stage, giving him hints to certain secrets. After Mega Man visits him in those areas, he will appear in Shade Man's stage hidden in the wall behind the Sniper Joe 01 after the mini-boss VAN Pookin. He will challenge Mega Man to a fight and if he takes enough damage, he will give his Proto Shield.

Proto Man appears in the intro stage, trying to shoot King, but is sliced in half, Mega Man shows concern and tells him to go to Dr Light for repairs, whilst Bass ignores him and claims he's the most powerful robot.

He reappears in the 3rd Castle Stage and uses his Big Bang Blast to destroy King's shield but he falls unconscious because he used nearly all of his power on that attack. King promptly teleports Proto Man out of the castle so that he can be repaired. He then appears in Bass's ending to destroy the data for King Mk II that Wily made.

He appears after Mega Man defeats Wily and warns him about Wily's trap. Mega Man says he can't risk it not being a trap. So he disappeared, but he soon returns to save the unconscious Mega Man from being crushed by the collapsing fortress.

He is also available as a downloadable playable character for 200 Wii points/160 Microsoft points/ $1.99. He plays the same as Mega Man except he can Slide and charge his Arm Cannon, receives twice damage from attacks and goes back twice as much when hit. He can only fire two shots at a time, as opposed to Mega Man's three. He can deflect bullets with his Proto Shield while jumping, and instead of Rush, he has the Proto Coil and Proto Jet, which somewhat resemble the transport items from Mega Man 2.

He has no story cutscenes, and he cannot use the shop.

Proto Man is a playable character from the start of the game, with all of his features from Mega Man 9. However, Proto Man can now use a store, even though there are less items in it, and the remaining items cost more (for example, an E-Tank costs 40 screws instead of 30 screws). He aids Mega Man to help find the parts for a vaccine-making device to fight the Roboenza virus, which causes robots to overheat and go crazy. In the middle of Wily Castle, he is infected with the virus and collapses. However, Mega Man had a prototype cure with him that Dr. Light had built earlier in the game, and the two were able to go on and defeat Wily.

In Super Adventure Rockman, Proto Man assists Mega Man. Depending of the path taken by the player, he defeats either Bubble Man or Heat Man offscreen in episode 1. In episode 2, he saves Mega Man from Sniper Joes, dropping his shield while doing it, which can be found and used by the player after the scene. If the player choose to not fight against Wood Man or lose to him, Proto Man will rescue Mega Man and says he has to fight will all his strength against Wily's robots. After the fight against Crash Man, Mega Man reaches a area monitored by several robots, having the choice to proceed now as there is no time to lose, or wait to get dark to pass unnoticed. If the player choose to continue, Proto Man appears and says Mega Man should be cautious and wait to get dark, going to the scene where he chooses to get dark. In episode 3, Proto Man saves Mega Man from Spark Man if he is defeated, and appears with Light's other robots in the ending.

Proto Man has minor appearances in some of the Game Boy games, where he gives recovery items to Mega Man. He is a playable character in the games Mega Man's Soccer, Mega Man: The Power Battle, Mega Man 2: The Power Fighters, and Mega Man: Battle & Chase.

Proto Man has a cameo appearance in Capcom World 2, and appears as a card in Wily and Right's RockBoard: That's Paradise and the three games from the SNK vs. Capcom: Card Fighters series. 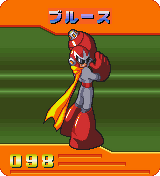 A proto-type robot that Dr. Light created. He appears out of nowhere to help Megaman.
"Let me tell you something..."
Good point: Good whistler
Bad point: Keeping contact
Like: Solitary travel
Dislike: Interviews