Pump Man (ポンプマン, Ponpu Man) is a Robot Master from Mega Man 10. He can create a shield of water droplets around himself and release them in several directions.[1]

Before contracting Roboenza, Pump Man worked at a wastewater treatment plant, purifying the water that came through. He also volunteered his time to wash graffiti off of walls in the neighborhood. Pump Man has also been described as a "neat freak".[2]

Pump Man starts off by creating a Water Shield. He then jumps around trying to tackle the player's character. He eventually fires off his Water Shield.

On Easy Mode, Pump Man's Water Shield only has four bubbles instead of eight. He also jumps only one time before spreading the Water Shield.

On Hard Mode, Pump Man has an extra attack in which he tosses his pump handle at the player like a boomerang.

His weakness is Thunder Wool, as it can hit him multiple times, and it also pierces and destroys his shield; however, only the lightning bolt has these properties, and Pump Man will effectively cancel out the attack if he hits the wool itself, so make sure that he can't do this. The Mirror Buster can also be used against him in Hard mode when he throws his pump handle.

Displays the amount of damage in units that Pump Man will receive from each Special Weapon in Mega Man 10.

Pump Man first appeared in the Worlds Collide crossover, as part of the Robot Master army fighting agains the heroes. Along with Aqua Man, he teamed up with Splash Woman to attack Amy Rose, only for Tails to swoop in and carry her away. He later attempted to fire a blast at Proto Man, also hitting Blaze the Cat in the process, but he used his shield to defend himself.

Pump Man later made his official debut in issue 32, where he aided in the restoration efforts of the planet in the days following Ra Moon's destruction, by pumping out excess water. 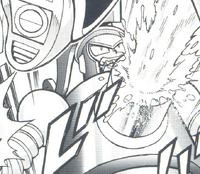