Purprill the Mandroid (パープリル・ザ・マンドロイド, Pāpuriru za Mandoroido) is a Pseudoroid from Mega Man ZX that appears as the boss of Area H, an old theme park abandoned after a Maverick attack.

The Mega Man ZX manual describes Purprill as a Baboon-styled Pseudoroid, although his name makes reference to mandrills. He has a purple body with details in red and green lights. He has large arms with three-digit hands, and a squared white face.

Purprill's arms contain a Biometal Model P fragment, which does not have an associated element. However, he has a light, agile frame, which makes him able to climb walls and hang from above to attack. He is also equipped with additional armaments such as bombs.

Of Serpent's Pseudoroids, Purprill is arguably the most despicable. He takes pleasure in running amok and causing destruction. Notably, when Vent encountered Mega Man ZX learned from Purprill his backstory, he made it clear that he had no reservations for killing Purprill due to Purprill being responsible for his parents' death. He is also extremely cocky, claiming that he will take out the Mega Man Model ZX in one hit even after being defeated once, and during the first encounter bragging that Model ZX has no hope of defeating him due to being an "executive officer". He has a tendency of uttering "ook" between his sentences, but this habit is absent in the manga.

Purprill was originally one of the Mavericks going wild in Area H, and participated in the raid that orphaned Vent and Aile. Serpent eventually noticed Purprill's "talent" and added him to his forces, giving him half the data of Biometal Model P. The other half was given to Protectos the Goreroid. Ten years later, Purprill returned to Area H on his own to "play around with his powers" in a place with "fond memories". He is defeated by the Mega Man Model ZX, who recovers his half of Model P. Purprill is revived for a rematch during the final battle in Slither Inc's head office, but he is destroyed again. He takes the defeat in stride and willingly yields his soul to Model W.

Purprill first appears in the end of chapter 10 kidnapping Vent's friend Sho.[1] In chapter 11, annoyed that Prometheus left him out from the attack to Vent and Guardian HQ, he decides to act on his own to prove that he is stronger them all of them together. He captured Sho to lure Vent, and threatens to kill Sho if Vent doesn't trade him Models H, L and F. Vent agrees and Purprill merges with the three Biometals, his body becoming silver-colored and obtaining Hivolt's speed, the resistance of Lurerre's true body, ice powers, and enhanced strength, leaving Vent in great disadvantage. As he is about to defeat Vent, Purprill laughs saying that after him he will go after Serpent and become the king of the world, believing nothing can stand in his way. However, the power of several Biometals used at the same time was to much for his body, and he began to crack and fall apart. Vent takes the opportunity to finish him with a charged shot, and obtains Biometal Model P. The three Biometals that Purprill possessed are severely damaged from the fight and taken to Fleuve for repairs.[2]

Purprill can extend his arms similar to grappling hooks, and can form into a giant shuriken, using this shuriken formation to fly across the room. He is also very agile, possessing very high acrobatic skills and being able to climb and contort himself into the previously mentioned shuriken form. Purprill was revealed to be the one that led the Mavericks that killed Vent/Aile's parents. Unlike Hidden Phantom, the Reploid whose data is contained in Model P, Purprill is very hyper and talkative. 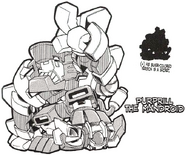 Chibi Purprill
Add a photo to this gallery

Retrieved from "https://megaman.fandom.com/wiki/Purprill_the_Mandroid?oldid=316081"
Community content is available under CC-BY-SA unless otherwise noted.