Quake Woman undergoes a number of different personalities throughout the comic. In the early days of her life, she was very much a young child, making jokes and tackling projects with glee. After her accident and subsequent removal of all personality, she became stoic and logical, shown by her perpetual blank expression on her face.

After Dr. Lalinde's personality restore attempt, Quake Woman became more open and slowly begins to learn to feel again. With these restored emotions came her fear of being buried and taken offline again, though not enough to prevent her from acting when the situation calls for it. Her new state gives her a remarkable sense of forgiveness, as she has moved past Dr. Lalinde's past personality removal and accepted her as her mother.

She first appears in issue 13, in the fourth story arc, Spiritus Ex Machina, at the Advanced Robotics Trade Show (A.R.T.S.) Convention along with her creator and "mother", Dr. Noele Lalinde. She was caught in a cave-in at work and, presumably, suffered extreme damage. Lalinde, who considered her creation a daughter, was heartbroken. Because of this, Lalinde decided to remove Quake Woman's personality, thinking that if she behaved less like a human and more like a machine, it would be easier to send her into dangerous situations without worry. After clashing with the Emerald Spears anti-robot terrorist group, however, Dr. Lalinde decided that she had made a mistake, and restored Quake Woman's personality programming. Quake Woman proved a valuable asset during this crisis, disabling the Emerald Spears' bombs by vibrating them apart and then working in tandem with Mega Man, who had copied her powers.

Having had her emotions restored, Quake Woman nervously joined Roll and Kalinka Cossack for a day at the beach, and found difficulty adjusting to having feelings again. The girls' plans were dashed by a rainstorm, only for Quake Woman and Roll to be called into action to save a sinking ship. They were joined in this endeavor by Rush, Oil Man and Splash Woman, and soon had the crisis handled. In Issue 22, she joined Ice Man in the Arctic and helped him create an ice sculpture for Roll, though it sadly failed to produce the effect he desired when she and Mega Man arrived. Roll then took it upon herself to play matchmaker for Tempo and Rock (Mega Man), and Tempo decided to give it a shot. Unfortunately, the four Robot Masters were caught in an ice cave-in, which ignited Tempo's fears of being buried. Mega Man helped her through it, and they agreed to be friends only for the time being. After a harrowing rescue, they returned to safety with Roll and Ice Man, with Tempo admitting that despite the terror induced by the situation she felt oddly thrilled.

Blackout: The Curse of Ra Moon

In issue 28, Quake Woman—along with the rest of the world's robots and electricity—shut down thanks to the electromagnetic waves made by Ra Moon. She was later restored by Issue 31, and is aiding the world as best as she can while under temporary protection from Ra Moon's EMP wave.

In Issue 34, as she was about to call it a night while bringing in rock samples, and changed in mid-sentence her call to Dr. Lalinde to say "Mom." This act brought an unexpected question from someone nearby, and in turning to the source Tempo encountered Break Man, who inquired about what it means to have a family. Aside from this, she was also briefly mentioned by Mega Man during his trek through the Amazon, where he suggested that they could use more Robot Masters like Quake Woman, with Dr. Cossack mentioning that he was in fact developing a Robot Master of that type before being interrupted.

Issue 35 has her showing Break Man her past, including how she used to be a different person: she was a bit of a jokester when she was first created, often not remembering the sample numbers and claiming she was going to "hurt the rocks feelings" in a joking manner, and also giggled while she was using her Quake Drill on "Mr. Basalt." Break Man found it impossible to accept that she could forgive Dr. Lalinde for doing what she had done to her, but Tempo chose to forgive and move on. She then asked why Break Man couldn't do the same, especially since Dr. Light hadn't actually done anything to him. In fury, Break Man retorted that he felt Light had replaced him with Roll and Rock, only for Dr. Lalinde to enter and pose the idea that perhaps Light had created other robot children so that Break Man wouldn't have to be alone again if he ever returned. With Break Man's departure, Tempo and Dr. Lalinde spoke together, and Lalinde admitted that she had been listening to the conversation between Tempo and Break Man, and hadn't entered before because she was afraid what Tempo would say about their unfortunate past experiences. Tempo then hugged her creator, resolving that they would help "fix each other."

Quake Woman later appeared in Sonic the Hedgehog Issue 273 in response to a summons sent out by Dr. Light that was also answered by the Wily Robot Masters who remained online. They were called upon to help counter the threat of Sonic Man, who had proved too much for the original line of Robot Masters to handle in Mega Man's absence. Though not designed for combat like her allies, Quake Woman volunteered to help out because she knew the attack was upsetting to her friend Roll. Unfortunately, the Wily Numbers and Quake Woman proved little better equipped to battle Sonic Man than their predecessors, and would have undoubtedly suffered great damage had it not been for the timely arrival of Break Man. Even the original Robot Master proved to be no match for the corrupted Sonic the Hedgehog, and he succeeded in activating the Unity Engine he had been sent to plant by his master Sigma-1. This resulted in Earth 20XX being fused together with Sonic's home planet, and an unexpected alliance between the Robot Masters and Freedom Fighters. After Sonic and the similarly corrupted Mega Man were restored to normal, Quake Woman joined the strange alliance-which also included several Maverick Hunters and Team Sticks-in boarding the Sky Patrol.

The united heroes got the opportunity to become acquainted while journeying to the Lost Hex, which served as Sigma's base. In particular, she had the opportunity to discuss her rediscovered emotions with Nicole, an A.I. Freedom Fighter who had undergone a journey not unlike Tempo's in discovering her "self." Sadly, the heroes were soon called upon to battle Sigma's Mechaniloids and the Deadly Six, with the latter group forcing the robotic members of the group to attack their friends. Fortunately, they were freed by Dr. Eggman and Dr. Wily using the Egg-Wily Uppity Robot Scrambler Cannon, though they had no time to rest as Sigma proceeded to employ his army of Mavericks. After a short battle in which they were overwhelmed, the heroes were unexpectedly joined by heroes from the world of Street Fighter. Inspired, Sally Acorn directed her allies to split into small teams and travel to various worlds to stop the Mavericks and gather new allies. Quake Woman thus departed for the world of Skies of Arcadia with Knuckles the Echidna, before joining in the final battle with Sigma and his defenders. The events of this conflict were later erased by the actions of Xander Payne, returning Quake Woman to her world.

In an effort to help Quake Woman with her emotional development, Dr. Lalinde constructed a sister Robot Master for her named Vesper Woman. Quake Woman found her somewhat bothersome, finding her sense of humor "lame" and her teasing frustrating. Despite this, she did agree to help her with her work in botanical specimen collecting, and was about to join her in one such excursion when Break Man suddenly appeared. He noted that she was making progress in recovering her emotions, given her obvious displeasure at seeing him again following their last unpleasant encounter. However, Tempo agreed to hear him out, and after hearing of recent experiences suggested that he return to Dr. Light. The pair were then interrupted by the returning Vesper Woman, who accused Break Man of being Quake Woman's boyfriend, something she denied.

After her sister got acquainted with Break Man, the trio went to see Dr. Lalinde, who examined Break Man and determined that the nuclear core Dr. Wily had equipped him with would eventually fail but wouldn't explode unless it was struck. Tempo became concerned for him, fearing that he was "dying," but Break Man felt that he had been doing so for some time. He then resolved to make up for his misdeeds as Wily's minion, and adopted a new identity to go with his new mission: Proto Man.

Quake Woman appears in a number of Short Circuits strips in the comics, beginning in Issue 14 where she is one of several individuals whose hair is affected by Elec Man's static electricity. She later appeared as one of several characters revealing New Years resolutions in Issue 21, resolving to be "more emotive." Issue 22 found her asking Ice Man about love, only to request that Dr. Lalinde remove her emotions again after hearing the answer. 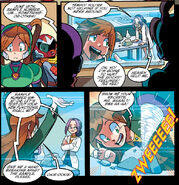 Quake Woman shows Break Man a video disc, in Issue 35, revealing her initial personality prior to the accident.

Quake Woman together with Splash Woman and Roll with Mega Man riding Rush in the background in Issue 19.

Quake Woman in her armor. 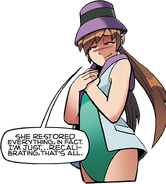 Tempo in her Swimsuit from issue #19

Retrieved from "https://megaman.fandom.com/wiki/Quake_Woman?oldid=357112"
Community content is available under CC-BY-SA unless otherwise noted.