Quick Boomerang (クイックブーメラン, Kuikku Būmeran) is Quick Man's Special Weapon. It is a small boomerang-shaped cutter that can be fired at high speed, but has short range. Mega Man can fire a couple of boomerangs with a small amount of energy.

Mega Man obtains Quick Boomerang by defeating Quick Man. It is the weakness of the Wily Castle boss Guts Tank, and is also useful against Metal Man, Mecha Dragon and Picopico-kun.

In the original game, the Quick Boomerang can damage every normal enemy in the game, including enemies that were normally supposed to be immune to all weapons such as the Big Fish in the third Wily Castle stage. This was fixed in future remakes such as Mega Man: The Wily Wars.

After completing the three games, Quick Boomerang can be used in the Wily Tower mode, where it is effective against Buster Rod G, but Iron Ball and the "Wily Machine" are immune to it.

Quick Boomerang is Bubble Man's weakness, as well being capable of damaging Wily Machine I's first form. Flash Man, Enker, and the Wily Machine's second form are immune to it.

The Quick Boomerang is obtained by the player that takes the Special Weapon Item dropped by Quick Man in the "Recover the new parts!" course. It is the weakness of Pharaoh Man and Mecha Dragon.

Quick Boomerang is Shadow Man's weakness. Besides normal Quick Boomerangs, Quick Man is shown to be able to generate a large boomerang from his left hand which he can wield like a sword.

Eight boomerangs remove one unit of weapon energy, resulting in being usable 224 times.

Mega Man uses the Quick Boomerang to escape from Dark Man's electromagnetic net in the episode The Day the Moon Fell from the Mega Man animated series. In the cartoon, its design has three boomerangs held in the firing mechanism. In the episode Robo-Spider it has the same design as Robo-Spider's web.

Quick Man's version is different from that in the games.  He has two different boomerangs - the one mounted on his helmet, which he throws, and laser boomerangs shot from a pair of launchers on his arm.

In the story arc The Return of Dr. Wily, Dr. Wily created a sophisticated malware program to infect Mega Man each time he downloaded a weapon data from his eight Robot Masters. In issue 8, Quick Man used two Quick Boomerangs to pin Mega Man against a wall after kicking him into it. He later used a Quick Boomerang to disable Flash Man while the latter was angsting about not having hair while Mega Man was at Flash Man's mercy. After defeating Quick Man in issue 11, Mega Man obtains the Quick Boomerang and one last component of the malware, altering his coding to make him loyal to Wily and teleporting him to the Wily Castle. However, Dr. Light was able to track the location and sends his Robot Masters to rescue Mega Man by finishing to install an anti-virus he was uploading to him. After returning to normal, Mega Man uses Quick Boomerang to help them defeat Mecha Dragon. Mega Man later copied the Quick Boomerang during the battle against Ra Moon, with Quick Man complying, while fighting Ra Thor (who had turned against Wily and the other Robot Masters loyal to Wily due to it being made with Ra Moon's technology).

While Quick Man is able to fire Quick Boomerangs from his right arm, in the manga he is only seen using it as a large boomerang formed with several Quick Boomerangs to use as a blade in close range combat. It appears to be very sharp and powerful, specially combined with his speed, being able to easily cut Mega Man's arm and deflect his shots in their first encounter, and also slice Flash Man and Mecha Dragon.

When fighting against the white alien robot in Mega Man Gigamix, Quick Man managed to create a small opening on his back with the boomerang, which later allowed Mega Man to defeat the robot, but as soon as it touched him, several cracks appeared on Quick Man's boomerang and spread to his right arm, forcing him to chop his arm to stop the damage. When used against Mercury to slice him in half, he laughs and starts reforming, but for some reason he is unable to (Quick Man apparently using his speed to slice the same spot again, avoiding his halves from combining) and perishes. 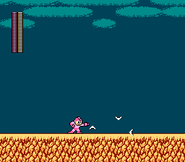 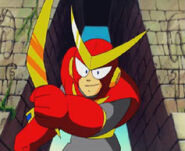 Quick Man with a large Quick Boomerang in the Mega Man comic. 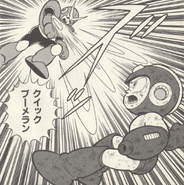 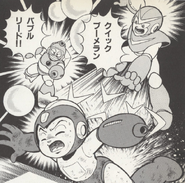