RT-55J is a big sumo wrestler robot in the Mega Man X series. It was a popular yokozuna from the "Robot Sumo" (ロボット大相撲, Robotto Ōzumō) in a period of peace, but has gone Maverick and appears as an optional sub-boss in Sting Chameleon's stage in Mega Man X and the remake Mega Man Maverick Hunter X. Its special techniques are Kagizume Harite (カギヅメはり手, Kagizume Harite roughly "Claw Slap") and Tatakitsuke Nage (たたきつけなげ, Tatakitsuke Nage "Slam Throw").[1] It talks with a robotic voice in Mega Man Maverick Hunter X and the Rockman X manga.

RT-55J is an optional sub-boss that can be found above the tunnel in the forest. It guards the Light Capsule where the First Armor's Body Parts (Arm Parts in the remake Mega Man Maverick Hunter X) upgrade can be obtained. RT-55J attacks by jumping over the player and trying to catch him with its extendable claws, ramming the player in the wall if successful. If its claw hits a wall, sometimes it will pull itself into the wall to strike the player along the way. RT-55J also attacks with punches in Mega Man Maverick Hunter X. Its durable claws will repel all attacks, but the rest of its body is vulnerable. Attacks should be focused on the robot's head or its torso when its claws are deployed.

RT-55J will try to jump on X, and, if in range, he will shoot a claw out at X to try and grab him to slam him into a wall. If X has the Arm Parts upgrade, keep charging to full level. If not, don't waste time charging, just shoot him rapidly. A good strategy is to wall kick up a wall while he's jumping at X, then jump over and in front of him. He will try to jump on X or try to grab him with one of his claws. If RT-55J uses the claw, dash out of range and rapidly attack the robot. It will cause much more damage than a single charge shot. But even better is charge up while wall jumping, and do the aforementioned strategy, and when he sends out his claw, dash out of the way, release the charge shot and hit him with a flurry of normal shots.

Another easy strategy is to stay on the far edge of the screen and wait for RT-55J to jump. When he does, dash under him (assuming X has the Foot Parts, from Chill Penguin's stage). Take a charged shot at his head and repeat. As long as the player is far enough across the screen, he will always jump instead of using his claw.

It is weak to Boomerang Cutter, but as it lacks an invincibility period, multi-hitting attacks like Storm Tornado are more effective.

RT-55J appears as the sub-boss of the Air Force stage, having a behavior similar to the Mega Man Maverick Hunter X appearance. A White Day themed version with the same behavior (but varying stats due to the different difficulty levels available) appeared in the top path of the White Day event variant of the Factory Stage.

Amount of shots/hits from weapons it takes to destroy RT-55J.

In the Rockman X manga, RT-55J appeared in the forest where Sting Chameleon was hiding, and X obtained an Body Parts after its defeat.

In Irregular Hunter Rockman X, X fights against RT-55J in the area controlled by Chill Penguin. 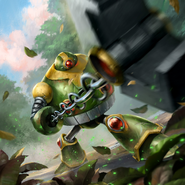 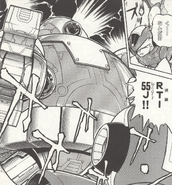 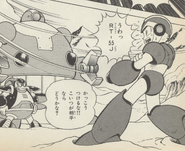 Retrieved from "https://megaman.fandom.com/wiki/RT-55J?oldid=347662"
Community content is available under CC-BY-SA unless otherwise noted.