Rafflesian (ラフレシアン, Rafureshian) is a secret boss in Mega Man X: Command Mission. She can be found within Tianna Camp once X's party has acquired the Tianna Key through use of the Deployment Center.

Rafflesian gets upset at the party for interrupting her dance practice session, as well as getting a glance at her secret lesson, and attacks the party. Defeating Rafflesian grants the party X's Ultimate Armor and two Figure Tokens.

Rafflesian's design most likely derives from the rafflesia, a parasitic flowering plant in the Indonesian rain forests. This may hint to why she constantly gains life energy each turn. Fittingly, she wears a long skirt resembling the large red petals of a rafflesia. She has light blue hair that comes back in a ponytail, and her face is covered by a pink visor. She also wields a staff with a sun on the tip. All in all, she highly resembles her Belladonna lackeys, but with the skirt and a higher voice to tell her apart.

Rafflesian seems a bit unhinged and obsessive, as she brutally attacks X's party without question upon their interruption. Unlike fellow secret boss Duckbill Mole, there is nothing to indicate that Rafflesian is affiliated with the Rebellion, or if she even knows or cares that the items in her room include an armor mode for X.

Her special attack Sunburst, can hit ten times for 250 damage each unless defended against. She also comes with two Belladonnas as backup. The only clear difference between Rafflesian and her Belladonnas is the large, knee length metallic ballerina skirt she dons (which her Sunburst beams are actually shot from) and her squeakier sounding voice. Therefore, it can be argued that she is the master Belladonna model. Both Rafflesian and the Belladonas regain all of their life energy every turn. They will also gain stat increases; Rafflesian gains each turn, but the Belladonas only gain when they are attacked. It's better to focus on one enemy at a time, starting with Rafflesian. If you hit them all at once, the Belladonas will just gain power and the battle will become tougher.

Rafflesian: Step♪ Step♪ And turn!♪ Tee hee! Eek! Just who are you?! You caught a glance of my secret lesson, didn't you?! Why, I can't believe this! You dirty little eensy weensy...Arrgggh! Unforgivable! It's time for your punishment! Behold, the myriad magical moves of the wondrous Super Idol, Rafflesian!

Early design concept of Rafflesian.
Add a photo to this gallery 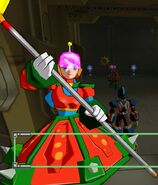 X, Zero, and Axl fighting against Rafflesian (center) and two Belladonnas
Add a photo to this gallery

Rafflesian's Icon.
Add a photo to this gallery

Retrieved from "https://megaman.fandom.com/wiki/Rafflesian?oldid=355201"
Community content is available under CC-BY-SA unless otherwise noted.