In its normal (green) state, Raider Killer has a simple attack pattern; and will only attack by firing pink flame-like shots and a three way laser blast at the height of every jump. But, if the search cursors in the previous room lock onto and analyze X, Raider Killer will use the pattern data obtained to progressively power up and prepare to repel the intruder; he gains new attack and defense capabilities each time X is scanned. Each form however has the same amount of health.

There are four levels of power to Raider Killer:

In Mega Man X2, the most effective weapon is the Speed Burner.

Attack that may inflict Bind status.

Next turn uses Focus Maser on target with the lowest LE.

S-type Attack, sometimes +80% of power to self.

Radar Killer is an enemy from Mega Man X: Command Mission that only appears in Gaudile Laboratory. Their appearance is similar to the original, but they have three legs and the Rebellion mark on both shoulders. They attacks with lasers. There is a broken Radar Killer in Tianna Camp that can be repaired and used in the Deployment Center.

Deals Shot-type damage to a single target (only does it when is in "Berserk" status).

S-type Attack, sometimes +80% of power to self.

Raider Killer appeared as an unit card in TEPPEN. 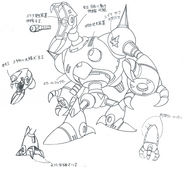 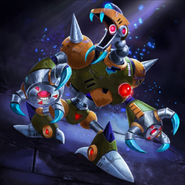 Rockman X2 manga
Add a photo to this gallery
Retrieved from "https://megaman.fandom.com/wiki/Raider_Killer?oldid=322342"
Community content is available under CC-BY-SA unless otherwise noted.