"We have fifteen seconds, so we'll do it in ten."
—Raika

Raika (ライカ, Raika) is a character from the Mega Man Battle Network series. He is a soldier from Sharo and the operator of SearchMan.EXE.

Raika first shows up in the final rounds of the Red Sun Tournament. He spied on Lan and confronted him to say that he was weak and would be defeated easily. Lan grows enraged and attempts to punch him, but Raika easily brushes him off. Then after Lan defeats Nebula NetNavis in the Undernet, Raika declares that after watching him battle, there was a 99% chance of victory. However, he is still defeated by Lan (with MegaMan gaining Search Soul) and returns to Sharo after revealing that the reason he came was to demonstrate Sharo's military power, which he failed to accomplish.

Raika joins Team ProtoMan. He is the counterpart of Higsby, because SearchMan (as his name implies) can search Dark Panels, similar to NumberMan. He is about to help Team ProtoMan get through a wall blocking access to liberating the End area when he gets called, because a criminal Navi he was looking for was spotted. He and SearchMan corner the Navi, but a Nebula Navi disguised as MegaMan attacks SearchMan and causes Raika to battle Lan when they meet up again. After they reconcile and delete the real culprits, Raika and SearchMan help liberate End Area. He is then mind controlled by the SoulNet Comp and battles Lan and MegaMan in ACDC, but is returned to normal after the SoulComp is defeated. He joins Team ProtoMan in infiltrating Nebula's base and returns to Sharo after the mission is successful.

Raika appears in the fourth chapter as a bodyguard for an important Sharo millionaire, Mr. Abramo who donated money to SciLab, visiting Netopia with his wife for their honeymoon.

When he escorts Mr. and Mrs. Abramo to DenTech Shrine, he has a headache and asked Lan to escort Mrs. Abramo's Navi the shrine's cyberworld.

Afterwards, on the airplane ride back to Sharo, the plane had a malfunction and Raika, Lan and Sherrice had their Navis enter the cyberworld to fix it. After succeeding in fixing the plane, SearchMan was attacked by Reverse and Raika lost control over him. MegaMan was able to defeat SearchMan and Raika regained control.

In the anime Raika is a NetSaver that joins up with Lan and Chaud in the fight against Dr. Regal and the Darkloids.

Using a combination of quick thinking and his tactical NetNavi, SearchMan, few have ever come close to beating them. Disgusted by the fact that Japan’s Net Saviors rely on Synchro Chips and Cross Fusion to defeat their enemies, he continually insults Lan's and MegaMan's intelligence and inability to analyze battle situations. During VideoMan.EXE's attack on a movie theater, Lan and MegaMan Cross Fuse to confront him. However, VideoMan proves too tricky an opponent for R-MegaMan and ends up defeating him. He is about to delete R-MegaMan. Meanwhile, Raika outwitted all the viruses in the Dimensional Area and reaches the Generator. He jacks in SearchMan who proceeds to destroy the Generator and save MegaMan.

He later appears when Lan is called to Sharo to free a rare metal mine from FridgeMan. Raika is concerned about another "mission", but his leader (later revealed to be his uncle) wouldn't allow it. Raika would disobey orders by grabbing onto Lan during a Cross Fusion, who was trying to get through a temporarily lowered Dimensional Area, resulting in both entering the mine. Even though Lan lashed out at him at first, he revealed his motives: he wanted to help rescue "Sharo's Greatest Hero", who was trapped in the mine at the time. This "hero" is revealed to be a dog who has the ability to sniff out rare metal, changing Sharo from a nation of poverity to a wealthy country. With Lan's help, he rescues the dog, and SearchMan helps repel ColdMan. After this, Raika treats Lan more warmly, even smiling at him after the mission was completed.

The past is forgotten (although not by much), when Raika returns in Stream with a new Synchro Chip (and a slightly better attitude), completing the Cross Fusion trio and adding a new member to the chosen marked with the Crest of Duo. This is rather ironic, as Raika previously would have never even considered or relied on Cross Fusing in battle. He also seems to develop a love interest with Princess Pride.

Raika bids his comrades goodbye and returns to Sharo early on in Beast, but returns a few episodes later, getting sucked into the portal to Beyondard with Chaud, Lan, Dingo, and Maylu. In Beast+, he and SearchMan fight Phantom versions of MegaMan, ProtoMan and one other to become cache data. 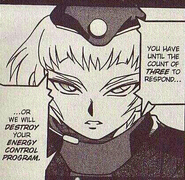 Raika in Mega Man NT Warrior (manga).
Add a photo to this gallery

Retrieved from "https://megaman.fandom.com/wiki/Raika?oldid=321048"
Community content is available under CC-BY-SA unless otherwise noted.